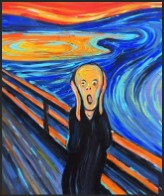 There are numerous existential threats to Western Civilization — reckless fiscal and monetary policies leading to government collapse, wokeness undermining  every institution in our society, the rush toward a zero-carbon economy supported by a shaky electric grid, and, least appreciated, the increasing complexity of technology and information systems. We have brought the first three dangers upon ourselves, and we theoretically have the power to reverse them. But we are powerless to deal with the fourth.

I have ranted in the past about system complexity. Like most Americans, I live on the Internet now. I cannot function without it. And it’s a mess. Infuriated by recent incidents, I feel compelled to escalate from rant to fulmination. Imagine me typing these words with spittled lips and fire shooting out of my eyes.

My consternation began earlier this week when I was spending the night out of town on business. My old laptop was frustratingly slow and klunky, so I broke down, went to Best Buy and purchased a new one. When I brought my shiny new Samsung back to the hotel and tried to set it up, I got caught in a Catch 22. I couldn’t establish an Internet connection, my laptop informed me, because the time on the laptop’s internal clock needed resetting. But I couldn’t reset the clock because… I couldn’t get on the Internet!

No problem, I thought. I’ll just turn on my iPhone hot spot, and hop online long enough to reset the clock. For reasons I cannot fathom, I could not sync my iPhone Bluetooth with my laptop’s. I’d done so at a restaurant earlier in the day with my old klunky laptop. But I couldn’t make a connection now with my shiny new laptop.

OK, that was frustrating, I thought, but no problem. I’ll take the laptop to the Geek Squad at Best Buy. So, I called Geek Squad to set up an appointment. Unfortunately, Geek Squad wouldn’t give me an appointment because my membership had just expired. And my membership didn’t renew because the personal credit card they had on file had been compromised, and a new card was in the mail.

No problem, I thought. I’ll just use my debit card.

Then I made a mistake. I should have known better. I googled “Geek Squad” on my iPhone and clicked on the top search engine result. Unbeknownst to me, the website was not the real Geek Squad but a look-alike. It told me to enter my debit card number. Ordinarily, that would have set off alarm bells. But I’d been getting notifications that my Geek Squad subscription was about to expire, and I figured that Geek Squad had tried renewing my credit card and it hadn’t worked, so, it seemed logical that I had to input a new credit card number. I entered my debit card data. Nothing happened. Frustrated, I entered my business debit card. Nothing happened. Then I realized, oh s—, that’s not the Geek Squad website.

Long story short, I finally found the real Geek Squad website and connected with an agent on a chat line. I explained my problem. The agent queried — and I’m not making this up, I wrote it down — “If I understand the issue correctly, you need help with wifi poooter.”

I don’t know if I was dealing with a deranged AI program or a call-center agent with a demented sense of humor, but I’d never experienced anything like this before.

The Geek Squad chatbot (or whatever it was) couldn’t help me fix my problem, but it did set up an appointment for me at Best Buy that evening. Geek Squad is a solid outfit, and the Best Buy guy figured out that my Samsung needed to do a massive round of updates…. like a half year’s worth. No wonder stuff wasn’t working properly. Thanks, Samsung. Not!

Meanwhile, late that afternoon I started getting notifications that my personal debit card and company debit card had been compromised. You’d think it would be an easy thing to get in touch with a bank to confirm that, yes, a particular transaction was indeed a fraudulent one.

So, I called the bank that handled the nonprofit corporate account and got caught in phone tree hell. I couldn’t get through because I didn’t have the credit card password or PIN number or something. After enduring an endless loop, repeating the same sequences over and over, I finally got transferred to a real person. I’m sure my yelling obscenities into the phone was what finally did the trick. But the live person transferred me to another, who transferred me to another line…. where I was put on indefinite hold. There I spent 15 to 20 minutes listening to piped in music featuring, among other rage-inducing ditties, some whistling idiot who made me want to rip my eardrums out. It was after 5:00 p.m. now, so, for all I knew, everyone had gone home. I finally gave up and handed off the problem to Tom, our treasurer. Turns out that the cards given to nonprofit customers didn’t have passwords (or PINs, or whatever), so it would have been impossible to navigate through the phone tree even if I had known what I was doing. The bank was aware of the problem, Tom told me, but hadn’t gotten around to fixing it.

Meanwhile, in trying to cancel my personal debit card, I encountered a new thing — voice recognition. I was asked to repeat the phrase, “My voice is my password, please verify me.” I did as I was instructed. It didn’t work. After that failed three times, I was told to do something else, I can’t remember what — by now my brains were too fried to keep coherent notes anymore. That didn’t work either.

Somehow I did manage to get the card canceled.

Then I had a new problem. I was out of town, and all three of my personal and business cards were canceled. I had no way of paying for dinner. Oh, wait, I had cash in my wallet.

And guess what. When I paid with cash… it worked! No logins. No passwords. No phone trees. They just took my money and gave me change. Miraculous!

Bottom line: We live now in a world in which everything relies upon the Internet, which is wonderful when it works. But IT systems are complex, and they don’t always integrate well with one another. They’re under relentless, never-ending attack, and they get compromised frequently. Combine that reality with human frailty — forgetting passwords, mis-typing passwords, getting blocked out because you’ve entered the incorrect password too many times, falling for phishing schemes that come at you from every direction, dealing with help desk people with incomprehensible foreign accents — and you have a recipe for never-ending angst.

Does the Bureau of Labor Statistics (or whoever calculates productivity metrics) take into account the extraordinary amount of time we Americans lose while flailing around — teeth gnashing, knuckles turning white, blood pressures rising — while trying to get things to work? I doubt it. Things are much worse than the government knows.

Look, I know I’m getting older, and I find it harder to follow complex instructions, I make a lot of typing mistakes entering passwords, and I just get befuddled. I know that some of my travails are my own damn fault. But guess what — there are millions just like me! If the system works only for Mensas, Microsoft-certified technicians, and people under 25, it’s cruising for a Thelma and Louise-like ending.

I’m waiting for the whole damn thing to crash about the same time the electric grid goes dark and the government is too broke to help with anything.

This entry was posted in Uncategorized and tagged James A. Bacon, Social breakdown. Bookmark the permalink.