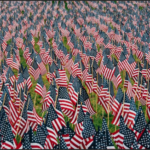 It happens all the time.

For example, I’ve always cringed whenever I hear comparisons between Hitler and any contemporary political figure.

There was only one Adolph Hitler. He was vile and he killed six million Jews.

No one in modern history is anywhere near as evil as that man. When people casually disparage their political opponents by comparing them to Hitler or his Nazis it is a sign that they’ve run out of rational arguments and want to devolve into hyperbole.

Ignore them. They are stupid.

Likewise, nothing in my lifetime can compare to the horror of September 11, 2001.

Certainly not the ugly events of January 6th, 2021. And they were ugly.

On the morning of September 11th, 19 Islamic radicals hijacked commercial jets and set off to unleash chaos, mass murder and destabilization of our Republic.

In all, nearly 3,000 people died that day. Innocent investment bankers, waiters, janitors, police officers and firefighters perished in the crashes and infernos. They were mothers and fathers, and sons and daughters. Folks just going about their business, or ironically, doing the business of keeping America safe at the Pentagon when they were murdered. They were Americans who never knew how brave they were until they were in the air on United 93 and decided that if they were going to die they weren’t going to take more innocent people with them. They fought back, foiling the hijackers and limiting the planned carnage.

But on yesterday’s 21st anniversary of September 11, social media was full of left-wingers comparing an out-of-control mob of lunatics storming the Capitol in an attempt to stop the certification of the 2020 presidential election with the worst terrorist attack on American soil.

Look, I will not and have not defended the actions of the January 6th rioters. They were wrong, their actions were despicable and un-American.

But attempts by political figures to speak of the murderous Islamic terrorism in the same breath with these homegrown nuts is foolish and disingenuous.

Kamala Harris did it in January as she lumped Pearl Harbor Day, September 11th and January 6th together. She’s a fool. We expect this sort of drivel from the queen of meaningless word salads.

Naturally, Sen. Mark Warner of Virginia said something similar yesterday. It must have been included in Sunday morning’s Democratic Party talking points.

The businessman, who campaigned for the Senate as a moderate but was unmasked as a political hack in 2014 after he meddled in state politics and was accused of dangling a federal judgeship to the daughter of a Democrat state senator to keep her father from resigning from the state senate and upsetting the political balance, was up to his old tricks yesterday.

On the September 11th edition of CBS’ Face the Nation, Warner managed to invoke January 6th twice in a discussion about threats to America from foreign actors. As a bonus to Democrats Warner even worked in a reference to “election deniers.” A political three-fer!

We know the Democrats are desperate to keep January 6th alive through the midterms, but this was distasteful even for Warner.

Here, read the transcript for yourselves:

MARGARET BRENNAN: You know, 9/11 introduced to many Americans for the very first time, this sense of vulnerability at home, and it launched the global war on terror. I wonder how vulnerable you think America is now, are we paying enough attention to the Middle East and to Afghanistan?

Note that the question is about Middle East and Afghanistan. He doesn’t answer that. Look where Warner goes instead:

SEN. WARNER: Well, Margaret, I remember, as most Americans do, where they were on 9/11. I was in the middle of a political campaign and suddenly, the differences with my opponent seem very small in comparison and our country came together. And in many ways, we defeated the terrorists because of the resilience of the American public because of our intelligence community, and we are safer, better prepared. The stunning thing to me is here we are 20 years later, and the attack on the symbol of our democracy was not coming from terrorists, but it came from literally insurgents attacking the Capitol on January 6th. So I believe we are stronger. I believe our intelligence community has performed remarkably. I think the threat of terror has diminished. I think we still have new challenges in terms of nation-state challenges, Russia in longer-term, a technology competition with China. But I do worry about some of the activity in this country where the election deniers, the insurgency that took place on January 6th, that is something I hope we could see that same kind of unity of spirit.

Do better, Sen. Warner. Same goes for anyone who cheapens the memory of September 11th by directly or indirectly comparing January 6th to the ghastly horror that shook America 21 years ago.