Woody Allen is quoted as saying that seventy percent of success in life is showing up. So it is with school.

Absenteeism is the most correctable scourge of Virginia public schools.

It is not the teachers’ job to get the kids there. But unexcused absenteeism is something other adults can fix pretty much at will. We have mandatory attendance in Virginia, and although the penalties can be significant,  the law is enforced only sporadically.

Some divisions enforce it. Some don’t. And there is a wide variation of enforcement in between.

Most will assume that in my data analysis project, the effects of reported chronic absenteeism in 2020-21 were generally reflected in:

Chronic absenteeism is a reported number that we must assume for these purposes is accurate, or accurate enough across 132 school divisions. I also note that reported absenteeism during virtual instruction in 2020-21 was in some cases gamed by students who turned off cameras at home after logging in, so the numbers of reported chronic absentees may undercount some of that phenomenon.

But so be it, the reported figures are bad enough.

We will examine here:

It turns out, no surprise, that nearly all school divisions reporting high chronic absenteeism in 2020-21 also had both:

I have put together from my larger spreadsheet a subset showing both the divisions with the highest and lowest chronic absenteeism in 2020-21. I left in only the columns relevant to this particular sub-analysis. I was trying to  visualize

I removed the reading SOL results from this sub-assessment because that skill is more likely to be practiced at home than the other subjects tested. What remains are English writing, History and Social Science, Math and Science.

The spreadsheet customized for this report is sorted at the start by the divisions with the lowest reported chronic absenteeism (5% or less) on top and the worst (25% or greater) on the bottom. 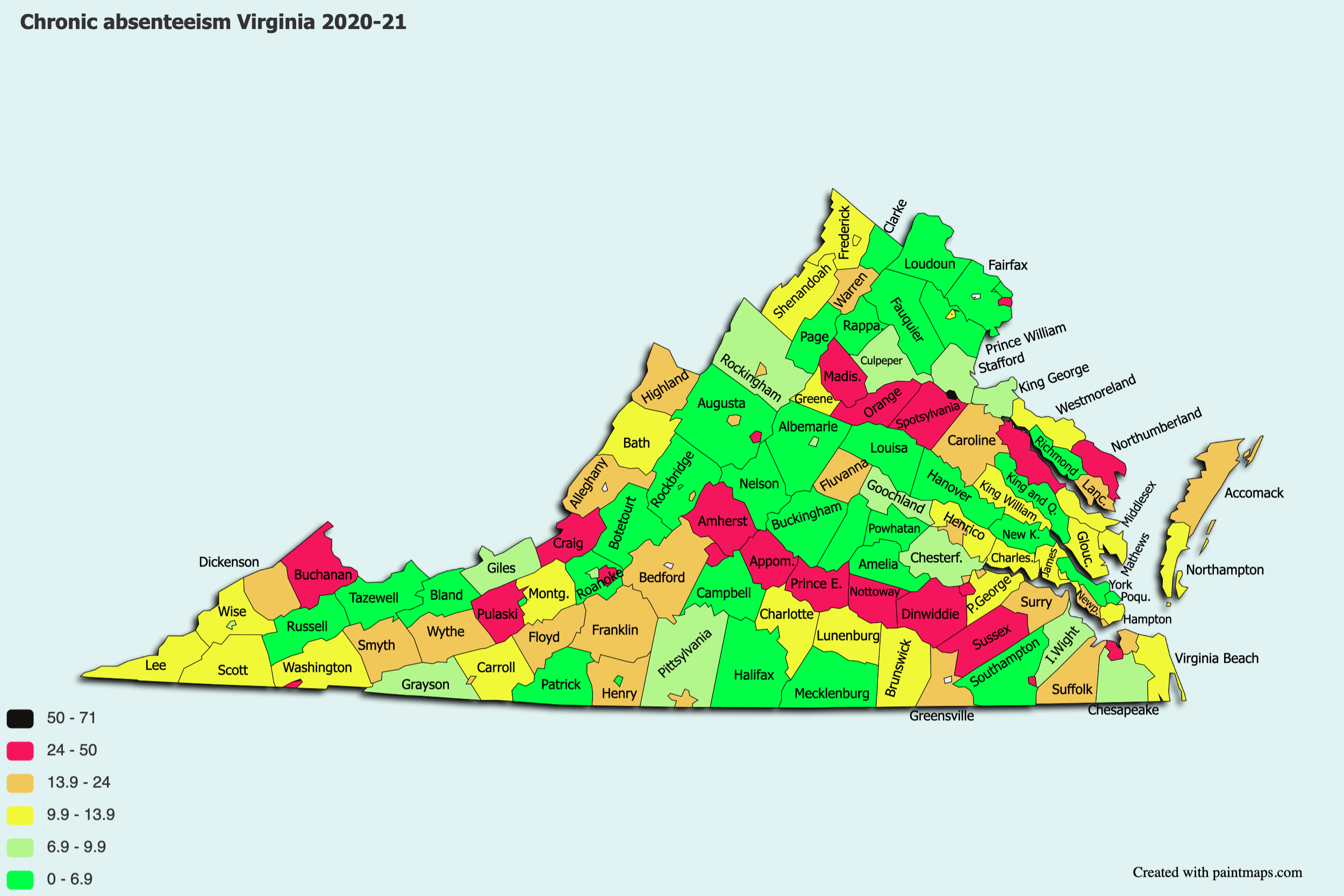 What else do we see?

I ran the numbers to compute the total numbers of students in each of the divisions who were chronically absent in 2020-21 against the records of truancy referrals reported to the state.

Even in 2020-21, some divisions tried hard to get their kids to participate. The ones that tried the hardest through the courts — measured as referring 20% or more of their chronic absentees to J&D court, were, from highest percentage of referrals:

Tell the truth. You did not expect that list.

The list of those who gave all their chronic absentees a pass, with none referred to court, were:

Don’t feel good if your division is not on that list. Only 51 of 132 divisions sent more than 5% of their chronic absentees with their parents to truancy court in 2020-21.

I get it, lots of things were going on during that school year. The vaccinations were not available in most of the state until early 2021. But Martinsville, Wise County, Hopewell, Westmoreland County, Russell County and Hampton figured it out.

I wonder how long it took kids and parents to figure out there was going to be no truancy referral for not going to school.

I wonder if the kids who lost their futures in 2020-21 by not being in school will look back fondly at the adults who did not enforce the truancy laws.

Bottom line. OK, we get it now.

We get that kids have to go to school to learn regardless of their race, economic status, English language proficiency or anything else. Finally something the left and right can agree on?

But we’ll wait and see which leaders bring enforcement of truancy laws to the fore in an attempt to get kids to school.

So their teachers can teach them. And so they have a chance in life.

And we’ll see who fights it.

This entry was posted in Attendance, Education (K-12) and tagged James Sherlock. Bookmark the permalink.