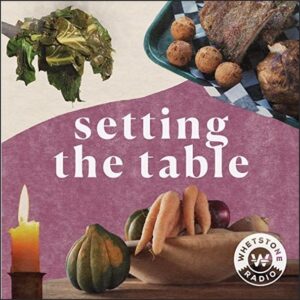 Yes, Virginia, it us true, we invented barbecue.

Last week my podcast library downloaded the latest episode of Eat It, Virginia, a podcast hosted by Wise and Martin as they welcomed Deb Freeman, a local Richmond rockstar who hosts her own podcast called Setting the Table. Her new-ish series focuses on the impact African Americans have made on American food, and even though it is only 12 episodes deep, it is a barn-burner: Setting the Table is the most listened-to food podcast on Apple podcasts and has been ranked the #1 food podcast in Canada, and charted high in France, China, Germany, Russia, and on and on.

“Virginia is so vital to so many American foods. Barbecue started here, macaroni and cheese, ice cream started here, fried chicken started here,” she said. “These are things that folks aren’t really talking about. But Virginians really need to be proud of. All of these great Southern and American dishes that everyone still eats today, 400 years later, they all came from Virginia.”

Excuse me? Barbeque was born in Virginia? Is that what she said? (She does, indeed — the interview with Freeman starts about the 18:45 mark of the Eat It, Virginia podcast, and the deep dive on barbecue starts at the 36 minute mark.)
To listen to Freeman’s “Virginia: The Birthplace of Barbecue” on her setting the Table podcast, click here). My favorite line is “I’m sorry North Carolina people, but really, in a lot of ways, Carolina barbecue is an extension of Virginia barbecue with a much better marketing campaign.”

A piece of friendly advice — don’t listen on an empty stomach.

“That’s something that only happened in Virginia, and people need to be proud of it. Let’s talk about it because people aren’t talking about it.”

Let’s listen to it and let’s talk about it — and let’s eat!

This column has been republished with permission from RVA 5X5.

This entry was posted in Virginia history and tagged Jon Baliles. Bookmark the permalink.