The State Corporation Commission staff has “shown its work” on an earlier estimate of electricity rate increases resulting from Virginia’s participation in the Regional Greenhouse Gas Initiative, despite a Democratic legislator’s complaint in Sunday’s Washington Post it was not being transparent.

“Even if you agree with the SCC, its analyses should be public information designed to inform the public debate. The SCC, however, has chosen a less transparent route, disadvantaging the public and the legislature from having all the necessary information to determine energy policy in the commonwealth,” Delegate David Toscano of Charlottesville wrote.

Here it is.  The report was shared with Bacon’s Rebellion by Department of Environmental Quality staff.  DEQ requested that the SCC provide additional details on its claim in a short letter that RGGI compliance would cost Dominion Energy Virginia $3.3 to $5.9 billion and could add $7-$12 to a monthly residential bill.

As you can see, the report is addressed to a member of the DEQ staff and as such was treated by the SCC as the DEQ’s to release or not.  It is not part of any case. It was not requested by a legislative committee.  Once again, as we saw with the infamous Governor’s Mansion Kitchen tour, people allege things and the media prints them, but it is best to wait for details.

The existence of the detailed memo was no secret, but I was waiting to see if it would appear on the record during the comment process DEQ was conducting on the RGGI regulation.  The comment period closed March 6 and this report was not there when I scanned the record last week. 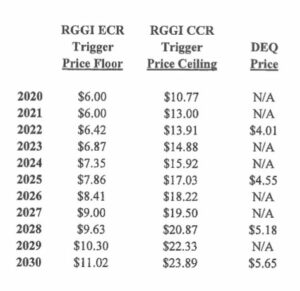 SCC estimates of future floor and ceiling amounts for the carbon tax at the heart of RGGI. DEQ’s figure is the right column. Click for larger view.

Is the SCC report still open to dispute and debate?  Certainly.  Any analysis looking out 25 years is filled with assumptions open to challenge. Somebody seeking to cross examine on the issue would probably want more detail.  One question not addressed, because nobody seems to be asking it, is whether changes in the pending regulation might alleviate some of those costs.

This longer document, written in the SCC’s semi-Socratic question and answer format, confirms what I surmised in a February Bacon’s Rebellion post citing that shorter communication from the SCC.  The SCC is using a higher estimate for the carbon tax revenue than DEQ used in producing its benign cost estimate for RGGI’s customer impact.  But the real problem is the way RGGI dictates capital decisions Dominion will make about closing some coal plants earlier than planned and building some new gas plants sooner than planned.

It also brings this SCC analysis  in line with information Dominion filed with the SCC as part of its amended Integrated Resource Plan.  It reinforces my point in that earlier post that the renewable generation called for in the 2018 bill accomplishes the CO2 reductions sought by the environmentalists, so joining RGGI is just layering on a big new tax.

Toscano, who apparently did have access to the memo before he wrote, just dismisses most of it without citing any of it.  The most important parts of it have the SCC staff instructing the staff over at DEQ about several aspects of the utility business they overlooked or don’t understand, and explaining that no other utility in RGGI is fully integrated with its own generation fleet.

If Dominion closes a power plant ahead of schedule, or cannot sell its output off system, ratepayers are still stuck with capital costs for that plant.  If Dominion builds a replacement plant earlier than planned, ratepayers get hit with those costs sooner than planned.  And Dominion has obligations to provide reliable generation as a part of the PJM regional transmission organization, obligations that are not easy to meet by simply installing solar, wind and batteries in the years to come.

The SCC projects early retirement of two Chesterfield and two Clover coal-fired units.  Early closure of the Clover 1 and 2 coal generation units will also impose costs on Virginians getting power from electric cooperatives, half-owners of that generation facility.  The SCC made no attempt to calculate that rate impact.

There remains a major disconnect in the SCC’s analysis between the cost of “linking with” RGGI and the cost of “joining.”  The different relationships implied by those two verbs are unclear, with the SCC’s highest cost tied to joining.  A huge disagreement between the DEQ estimates and the SCC’s involves the projected carbon tax per-ton utilities will pay for their emissions.  Based on what I read on RGGI’s website, I think the DEQ’s projection that those tax levels will stay steady is unrealistic.

I have some sympathy for the Air Pollution Control Board, now presented with wildly different cost estimates.  Then again, customer cost has been secondary to environmental virtue signaling from the start on this process. Do not expect the state’s Attorney General – charged by law with representing consumer interests – to suddenly petition for a hearing.

We’ll find out what it costs when it starts to cost us, and keep learning for decades.