Sales Tax On Groceries With Us Through Christmas 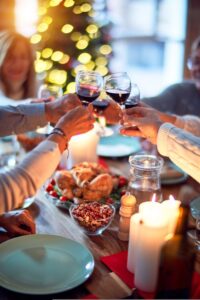 The food tax will still be with us for Thanksgiving and Christmas?

Everybody eats. With all the money sloshing around the Virginia treasury for the General Assembly to play with, it is hard to see the logic in continuing the state sales tax on groceries an additional six months, delaying that particular tax cut until January 1.

The inflation on everything at the grocery store means more tax revenue is coming in from that source than was expected when the initial budget was prepared last year. If they had allowed the tax cut effective July 1 rather than January 1, inflation on other items people buy (restaurant meals, furniture, electronics, clothing, non-food items) would protect the state’s spending in full (necessities and niceties.)

But no, under the budget conference report adopted by the General Assembly June 1, the state’s 1.5% tax on unprepared foods will continue through the summer and fall of 2022. People will pay the full sales tax on their summer cookouts, packed school lunches and Thanksgiving and Christmas holiday meals. What is an additional dollar or two per week for 26 weeks, after all?

Financially, it is not a huge thing. Politically, it ought to prove a headache for legislators.

Frankly, it was probably just a power trip for the Democrats in the Senate, who held that position (no changes until January 1) through the budget negotiations and think they won something by prevailing. They are also proud of having totally protected the remaining 1% food tax, which goes directly to local governments.

On the other hand, a new sales tax exemption for pet medications will go into effect July 1.

As they always do, the people who staff the money committees at the Assembly have prepared excellent summaries of the conference report actions you might want to examine. The House version is here and the Senate version here.

During the discussions at Wednesday’s session, advocates for the conference report claimed the various elements of tax relief will work out to about $1,100 saved in the coming year for the average Virginia family of four. The biggest part of that is the one-time cash rebate expected to arrive later this summer ($500 for a couple). The second largest part is the increase in the standard deduction, up from $9,000 to $16,000 for married taxpayers filing jointly, reducing their income tax this year and future years by $403.

Individual taxes were the focus, receiving the largest adjustments in this period of record state revenue. Only a handful of tax changes to benefit business were made, although both business and individual taxpayers will benefit from the decision to fully conform with the Internal Revenue Service Code changes for 2022.

That conformity decision means the many small and large business that took money in the second round of the Paycheck Protection Program (PPP) and were able to convert the loan into a grant will owe no state tax on any of it. That is a big improvement over 2021, when only the first $100,000 in PPP grants were exempted.

Legislators will crow about having eliminated the accelerated sales tax rules, requiring certain businesses to remit their July sales tax collections in June. But that move doesn’t save anybody one dollar. It is merely a timing issue, now moving the expense back into the proper fiscal year. That one-time collection date acceleration is a favorite gimmick for quick revenue in a budget crunch (now primed to use again in the next one).

And the conferees put $180 million in remaining federal grant funds into the Unemployment Insurance Trust Fund, enough to short-circuit what would have been a UI tax increase for calendar year 2023. That and the PPP decision were about the only significant tax-related provisions for business, and the 2022 General Assembly did nothing else to reduce business taxes and make Virginia more competitive.

Nobody talks about it, but the state’s flush cash position can still be traced to the 2019 General Assembly session. The full impact of the various federal tax changes under the 2017 Tax Cuts and Jobs Act (TCJA) was becoming apparent, but the Assembly (then a Republican-controlled body) stubbornly refused to make serious adjustments in state tax rules to prevent the windfall. It is that windfall which filled state tax coffers starting in 2020, along with other tax hikes approved under former Governor Ralph Northam (D).

With the standard deduction rising now to $16,000 for a couple (up from $6,000 in 2018), a substantial portion of the windfall paid by individuals will now be returned. Not so the TCJA windfall coming in from business income taxpayers. Through ten months of this fiscal year, the state had collected $1.6 billion in corporate income taxes, double the less than $800 million at the same point four years ago.

There is much to praise in the final budget. Conferees viewed much of the extra revenue as one-time money, perhaps unlikely to continue, which is certainly true of the flood of federal COVID-related grants. They used it to shore up the Virginia Retirement System with an extra infusion, replace some capital debt with cash payments instead, create a long-demanded school construction fund, and now expect a record $3.8 billion to be held in reserve by the end of the next cycle in June 2024.

Don’t doubt they could have found a hundred million or so to relieve Virginians of the state food tax a bit earlier, instead of making them pay the full tax all the way to New Year’s Day, 2023. That was pure Grinch.