Virginia’s state-funded colleges and universities are too expensive.

Tuitions are the headline numbers.

But student fees and food and housing costs are as important to the budgets of families and individual students as tuition.

Costs within the college system have gone up because of a general lack of management systems and data to support oversight. They are going up further because of inflation in the economy.

Demand is going to plummet starting in 2025 as the “demographic cliff” of a 15 % drop in freshman prospects approaches due to the decline in birth rate in the 2008 recession that lasted for years thereafter.

The missing babies from 2008 would have begun entering college in 2025. Not a rosy scenario for the colleges. They all talk about it a great deal internally.

Some will have to get smaller to maintain student quality admissions standards or, alternately, lower those standards along with those of the programs of instruction.

Maintaining the same staff with smaller numbers of students will not work without massive price increases that they will not be able effectively to pass on without exacerbating the demand crisis.

Action is demanded, or parts of the Virginia higher education system, generally the smaller ones, are going to price themselves out of existence. The ones that do not act will be in a continuing crisis of their own making.

In the realm of enterprise disruptions, declining demand and increased costs are the big leagues.

Enterprise architecture (EA) is a discipline for supporting enterprise responses to disruptive forces by supporting the visualization, identification and analysis of change toward desired business outcomes.

The Clinger-Cohne Act of 1996, formally named the Information Technology Management Reform Act, requires EA in every corner of the federal government.  State governments, including Virginia, have largely adopted the same approach. The Centers for Medicare/Medicaid Services (CMS) defines EA as follows:

Virginia’s higher education institutions need to be able to describe, establish and maintain enterprise architectures. I am going to guess few have, even though the state requires them to do so. Even those that teach it. 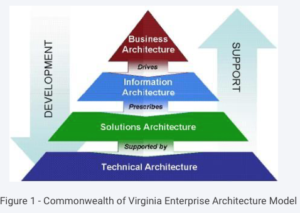 Without it, big changes are nothing but spitballing with a signature. Boards of Visitors know what I mean.

Students and their parents seek from those institutions instruction and research opportunities. But they pay for a lot more than that. And I am not talking now about spas and spiritual wellness centers.

I hope there is already in place a structured approach to lowering costs, and thus tuitions/fees, at Virginia’s 39 state-funded colleges and universities without an impact on the quality of instruction and research, the two primary missions of such institutions.

Even before the demographic cliff.

Featherbedding at scale. The culprit for skyrocketing costs is thought by the public to be the costs of management and administration (M/A). Those who went to college in Virginia in earlier decades are simply bewildered and sometimes enraged by the expansion of those cost centers.

It appears, whether true or not, to be featherbedding at scale.

The Boards of Visitors. The boards and the public they represent need assurance that those costs are no higher than needed to support instruction and research.

For the boards who already have a good handle on all of that, tell the stakeholders you do and feel free to ignore the rest of this article.

The approach should be to get costs under control by setting upper limits in the overall budget and in the budgets of its semi-independent or independent divisions for the costs of management and administration relative to the total budget of each. EA’s are necessary to do that in a way that has relatively predictable outcomes.

Boards must maintain quality, but they also must maintain efficiency and effectiveness. To do that they will need unvarnished data. And, in many cases, better financial reporting systems and detailed employee categorization and utilization data.

Just like the businesses they are. Because they are publicly funded, they also owe transparency.

Management and administration is not a mission. I suspect M/A varies widely as a percentage of the budget among Virginia universities and colleges, and within divisions of each. It may have in some places grown relatively unnoticed, not the least because of the lack of actionable data to senior leadership, until it has become almost a third mission rather than a service.

I have no idea how many admissions staff, lawyers, accountants, Deans, assistant Deans, Center directors, HR people (to which category I assign DEI), etc. any one college or university needs or has. Or what percentage of the workforce and budgets those personnel represent. Or should represent.

The issue here is that Boards of Visitors need to know and need to assess the contributions of and demand for such costs and optimize them in order to keep tuition and fees as low as practicable and create efficient and effective organizations.

Near-independent units, like hospitals, some professional schools and the athletic departments, require similar systems to inform their decisions and those of their boards.

For example, Law and Darden are cash flow positive to the University of Virginia general account. Tuitions for those measurably valuable degrees are set at market rates.

In the last two weeks UVA has rolled out a totally new financial management system. It took two years to implement.

All major financial reporting has just been ported over to new software. The kinds of reports that are needed may be, for the first time ever, feasible at that institution. The new systems will eventually reduce the demand for accounting staff, save money, provide access to previously inaccessible data, and streamline reporting of all sorts.

So, up to now, since Thomas Jefferson was the Rector, the Board of Visitors has been largely flying blind, including during the FY 23 budget saga.

None of what I recommend here can be accomplished at UVa without the new system.  So, for many state institutions, systems investment will be needed.

Some employee classifications may constitute pure overhead, like perhaps admissions and legal. Some may vary their time between general overhead work supporting university management and direct support to operating divisions, like some positions in financial accounting, H.R. and perhaps others.

Or the M/A structures of each — distributed, centralized, near-independent or a mix of all three.

I recommend a meaningful classification system for such employees that will permit the production of meaningful reports from accounting data of the numbers and costs of management, administrative, instructional and research staff.

Each may have such a system already in place. If they do, good.  If not, then they should establish one.

Such a system by itself will identify primary responsibilities of each employee. But it will not indicate the demand as signified by time allocation by employees.

Time accounting. All employees sell their time to their employers. People, of course, do work outside their job descriptions.

Some in the service sector account for their time weekly on an hourly basis so that billing may be made to the right internal or external customers.

In those enterprises, the weekly time sheet is a sacrament.

Boards may wish to consider the necessity of charge numbers and time sheets if they do not already have them. Such time sheets for designated instructional and research personnel could indicate classroom time, research time and administrative time of each employee weekly.

Service centers, where appropriate, can charge their hourly time to the academic departments or research centers to which they provide services. Or to overhead when not providing direct support.

When an academic department has to assign a charge number to service centers for services provided, it will tend to pay far more attention to those charges than if the service centers are separately funded.

That is just a fact of life.

Gamesmanship and monitoring. Nothing focuses the minds of employees as much as a threat to what they consider their own interests.

Any system that gives the senior administration and boards enough information with which to allocate budgets will be gamed. In hierarchical structures, a second problem is that those who know the facts may be reluctant to reveal data to a superior who may be embarrassed by it.

There will need to be some system with which to monitor that and inspect where necessary.

Every school has internal and external auditors. The role of the external editors may have to be expanded to benchmarking and monitoring the costs at issue.

Capital investments. I suspect most boards have tighter control over the capital budgets than the personnel budgets, so I leave that alone for this discussion.

General Services. Services like fire, police, logistics, food services, and grounds and facilities maintenance are important, and need their own demand/supply assessments, but that is not the focus here.

Lessons learned and intellectual property sharing. One or more state institutions of higher learning may have solved the problem years ago that UVa thinks it just solved with its new financial accounting system .

I have no idea. Neither, I expect, does UVa. Which is the point.

Certainly there must be a way if, say, Virginia Tech or one of its contractors solves a problem in enterprise, financial systems or data architecture that the board and senior management at all 39 Virginia colleges and universities face, that such information, including the intellectual property, can be shared among those state schools.

Maybe it already is. But I doubt it. If there is, someone share the details.

I am not well positioned to figure out how that might be orchestrated, but it should be. People share incredibly un-useful information on the internet constantly.

Perhaps there can be a restricted-access web-based system to share this type of information among state institutions and make it more broadly useful. Or something.

Bottom line. Board oversight of demand for and costs of management and administrative services across their institutions requires better systems and data than some of them may have. And enterprise architectures with which to visualize the potential effects of changes.

With the cliff, academic demand and supply will need to be addressed as well. Another subject, same methodology.

The recommendations here are unexecutable with any assurance of success without them.

Reduction in authorized positions is possible in any bureaucracy. It has to be.

But as a practical matter, overspending on management and administration positions for state employees needs to be reduced as much as possible by attrition, retirements and voluntary leaving, not firings.

Two- (the FY 25 cliff), five- and 10-year plans of actions with milestones for rebalancing the ratios are the appropriate approaches, not instantaneous in-year changes.

The board can set goals and senior management can eliminate newly-open positions or reclassify them to achieve the structural balance required. Current employees in positions designated as excess can be given priority, incentivized and trained to apply for newly-reclassified and open positions.

Taxpayers, students and their parents deserve that, as do current employees.