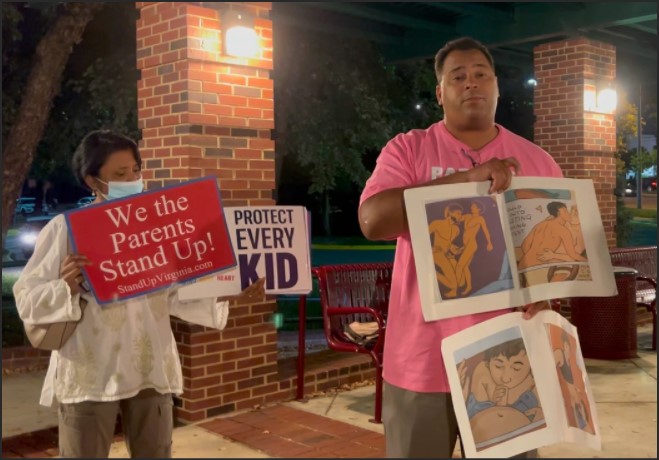 FAIRFAX, Virginia – A spokeswoman for Fairfax County Commonwealth Attorney Steve Descano says the prosecutor’s office is “evaluating the facts” of four criminal cases that accuse a black father, Harry Jackson, of “slander and libel” for raising concerns that a local woke activist was engaging in “grooming behavior.”

I have evaluated “the facts,” and there is only one conclusion to be reached: Descano is engaging in prosecutorial overreach to intimidate a parent who has dared to challenge the all-Democratic school board in court for its racist, anti-Asian admissions changes to America’s No. 1 high school, Thomas Jefferson High School for Science and Technology, affectionally known as TJ.

In late February, I stood outside courtroom 2K of the Fairfax County District Courthouse, as Fairfax County Assistant Commonwealth Attorney Paul Vitali huddled in friendly banter with a man and two women. Vitali was deep in conversation with a local activist, Jorge Torrico, talking to him about criminal charges Torrico had filed with a local magistrate against Jackson for “slander and libel.”

Watching, a local mother, supporting Jackson, said, “Something fishy is going on.”

Everyone – from journalists to parents – should be very concerned about what is going on in the case of the Commonwealth of Virginia v. Harry Randall Jackson. As reported by Daily Wire reporter Luke Rosiak, Descano sent his attorney to court while claiming soon after that he didn’t have enough staff to pursue criminal charges in the death of an infant. Rosiak wrote: “Last month, Descano’s office let off a woman who allegedly violently abused an infant. On March 18, the office told the judge it would not pursue the woman because ‘there are no ACA’s [prosecutors] available for a four-day jury trial beginning on March 21, 2022.’”

Descano is a Democrat whose electoral win in 2019 was funded in large part by Democrat billionaire George Soros, who donated millions of dollars to prosecutor races from California to New York, according to campaign finance records.

Descano is keeping alive criminal slander and libel charges against Jackson, for tweeting concern in November 2020 about the alleged “grooming behavior” of the man in the courthouse huddle – Jorge Torrico — a TJ Class of 1998 alumnus.

Torrico is a leader in TJ Alumni Action Group, a 501(c)4 political lobbying group that has been badgering TJ parents (including Jackson and me) who cofounded a grassroots group, Coalition for TJ, that teamed up with attorneys from Pacific Legal Foundation to successfully sue the 12-0 Democratic Fairfax County School Board for removing a race-blind, merit-based admissions test to TJ. Jackson has a son at TJ and has been a strong proponent of merit-based, race-blind admissions to the school. My son graduated from the school in the Class of 2021.

This prosecution raises serious questions about the involvement of the local Democratic prosecutor in our hotly contested legal battle. Torrico and Coalition for TJ didn’t return a request seeking comment.

The morning of Wednesday, February 23, I stood outside courtroom 2K, watching the conversation in the huddle, aghast. This case should concern not only every parent but every journalist. In my 30 years as a journalist, no libel attorney has ever told my colleagues and me that we could face criminal charges for libel. Libel, defamation and slander cases, like former Alaska Governor Sara Palin’s case against The New York Times, are adjudicated in civil court. I thought the prosecutor’s office would go to court and dismiss the case. To my shock, the attorney in Descano’s office is pursuing a little-used criminal statute meant to protect women from slander about their chastity and enjoyed a friendly banter with Torrico and his colleagues, who included a local Democratic Party activist, Vanessa Hall, notorious in the community as a vicious troll, using the Twitter handle @V_TheClash. In June 2020, Hall dismissed a proposal by the TJ Alumni Action Group to “occupy” TJ as a “joke.”

This case raises questions about the relationship between local Democratic Party politicians and activists and the prosecutor’s office.

Jackson is a strong, outspoken black father who is a plaintiff in our historic case against the all-Democratic school board. As Jackson explained to me in the fall of 2020, “Fairfax County used black and Hispanic students to put a hit on Asian students.”

Jackson speaks bluntly. That is not a crime.

The first black student to attend the U.S. Naval Academy from Lancaster, Pa., Jackson became an Olympic-level powerlifter and bobsled competitor, not to mention a Naval intelligence officer. It’s not only his blunt speech but his decision to be a plaintiff in our Coalition for TJ lawsuit that put Jackson in the crosshairs of Torrico and the TJ Alumni Action Group. Like Asian families with children who succeed academically in schools like TJ, Jackson is an inconvenient minority for “progressive” politics, refusing the narrative of the ideologues of critical race theory. They argue that America is embedded with such systemic racism that minorities cannot advance without convoluted “equity” programs that follow this strange edict that Ibram X. Kendi, an architect of the modern day new racism of “anti-racism,” wrote in his book, How to Be an Antiracist: “The only remedy to past discrimination is present discrimination.”

Inside courtroom 2K, an attorney for Jackson asked a Fairfax County District Court judge to dismiss two charges of “slander and libel,” but Vitali, representing Descano’s office, sought a continuance and got it, with a hearing date of Friday, April 22. The threat of criminal prosecution has hung over Jackson for weeks.

Becky Campbell, public information officer for the Fairfax  County Commonwealth’s Attorney Office told me, “In Virginia a citizen can swear out a warrant through the Magistrate’s Office without any involvement from the prosecutor or law enforcement. That is what happened in this instance. Our office is still evaluating the facts of the case and has not made the decision to move forward with these charges at this juncture.”

When I asked her why Descano wasn’t simply dropping the charges, she wrote, “Because, as we indicated, charges were obtained without our involvement or that of law enforcement the case was initially continued to allow time for an adequate review by the prosecutor.”

She added: “Again, we have not yet directly weighed in on this matter but will do so very soon. As such, any current charges are the purview of the citizen complainant and the magistrate. At this juncture no charge has been brought by our office.”

I don’t buy it. Descano has had since at least February 23 to drop the charges.

“Commonwealth of Virginia v. Harry R. Jackson” says it all. It’s been weeks and Torrico has responded by filing two more charges of “libel and slander” against Jackson that also have an April 22 hearing date.

As Descano dilly-dallies on this case against Jackson, he has arranged plea deals with Oscar Zaldivar, a child sex abuse assailant, and another man, Gerald Brevard III, who carried out deadly shootings recently targeting five homeless men in D.C. and New York City.

Last Friday, Jackson’s attorney, Marina Medvin, filed a motion to dismiss four criminal cases against Jackson, arguing that the cases are “unconstitutional under First Amendment analysis.” Jackson and his attorney will head into courtroom 2J this Friday, April 8, at 10 AM, to dismiss the charges. Fairfax County records have been updated in the case.

If the case isn’t dismissed, Jackson, a graduate of the U.S. Naval Academy and a former Naval intelligence officer, goes to court on April 22 court to defend himself against four charges of “slander and libel.” Jackson teaches cyber security and national security courses at several colleges and universities.

In an episode of a podcast, “Take Back Our Schools,” just released by the Ricochet platform, I told former Wisconsin Gov. Scott Walker and parent activist Andrew Guttman about the prosecution.

“It’s all about intimidation,” Walker said.

It Began with a PTSA Chat

The criminal case against Jackson began as a spat in the fall of 2020 between Jackson and Torrico, head of the Application Engagement Committee of TJ Alumni Action Group. After the killing of George Floyd in May 2020, Torrico and the TJ Alumni Action Group lobbied former Gov. Ralph Northam’s office and the Fairfax County school board aggressively to remove the merit-based admissions test to TJ, so that the school could admit more black and Hispanic students — in a purge of Asian students.

Our parents in Coalition for TJ argued for merit-based diversity efforts that focused on the pipeline to TJ, not lazy, quick solutions, like the all-Democratic school board was choosing.

On the evening of Thursday,  Nov. 19, 2020, Torrico attended an online TJ PTSA meeting. In the online chat, Torrico asked the TJ Student Government Association (SGA) president about outreach for a leadership event for middle school students, saying that his middle schooler hadn’t heard of the event.

The student president typed a message in the chat, asking Torrico for his email address. Torrico responded at 8:36 p.m., “thank you @[redacted] :).”

Parents (including me) and staff expressed concern with the principal, Ann Bonitatibus, about an adult having private communication with a student. We knew, too, Torrico didn’t have a child at TJ. On Monday, Nov. 23, 2020, Bonitatibus wrote an email, saying: “One SGA adviser was at the meeting in question and witnessed the exchange. I have had significant follow up with the SGA advisers who are ensuring all communication with SGA student leadership is conducted on approved FCPS platforms and with advisers’ involvement. Furthermore, the original question that was posed by the parent about selection for the leadership summit would have been best addressed to a middle school principal, not to our SGA students. We are redirecting that individual accordingly.”

She added: “Student safety is treated as a highest priority and any alleged threat to that safety is fully investigated and action is taken as warranted. An exchange such as what happened on the Zoom meeting, while all within the public eye, is proof positive why FCPS has clear guidelines for which platforms are used for adults to interact with students.”

The next day, on Twitter, Torrico wrote to Jackson, suggesting they could “work together.”

Jackson responded: “After seeing you in action last night, I am not comfortable working with you in engaging children. It was very disturbing seeing you exhibit ‘grooming’ behavior. I do work with children and I get background checks, I suggest you do the same because last night was creepy.” 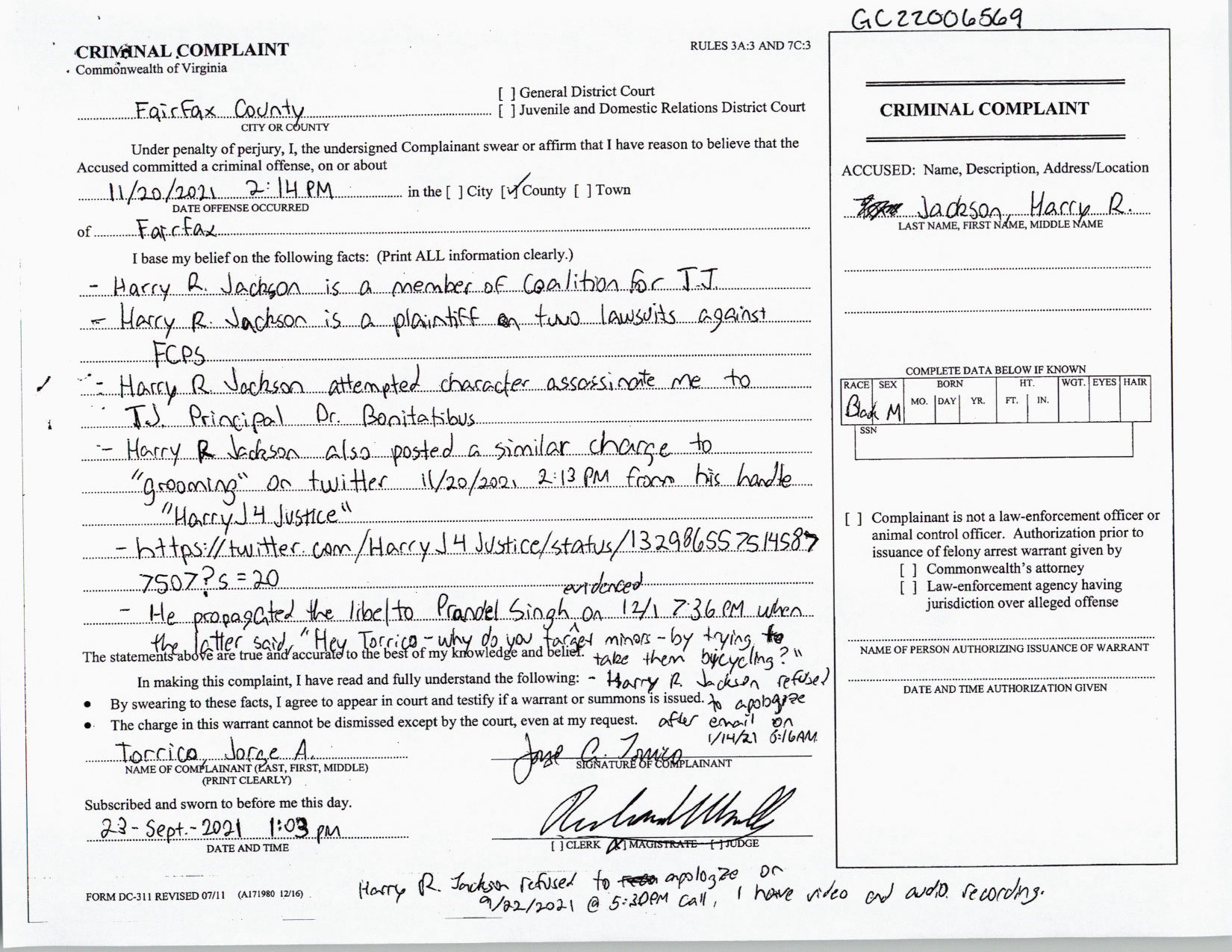 This article has been republished with permission from Asra Investigates.

This entry was posted in Courts and law, Culture wars, Education (K-12) and tagged Asra Q. Nomani. Bookmark the permalink.