Progressivism as a Cause of Racial Inequity in Schools 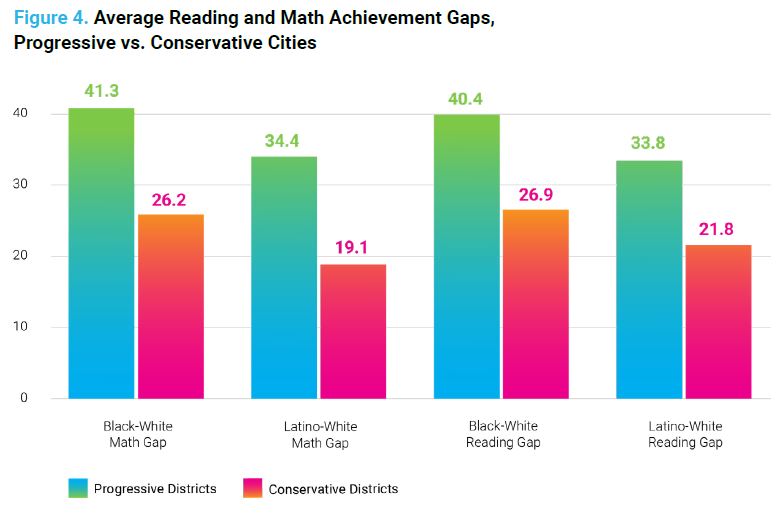 Chris Stewart has long dedicated himself to community activism and racial equity in public schools. He has served on the Minneapolis Public Schools Board of Education and, as a nonprofit CEO, he has championed grassroots movements to spur innovation in family and education policy. Somewhere along the line, it dawned upon him that something about “progressive” educational policies weren’t working.

His home state of Minnesota considers itself a “progressive exemplar,” he writes in the introduction to a study released this month, “The Secret Shame: How America’s Most Progressive Cities Betray their Commitment to Educational Opportunity for All.” “[But] educational outcomes for students of color and American Indians are among the worst in the nation.”

Progressives need to come to grips with a hard reality, Stewart says: The disparity in educational outcomes between whites on the one hand and African-Americans and Hispanics on the other is far greater in progressive cities than in conservative cities. Of particular interest to readers of Bacon’s Rebellion, the study finds that the city with the smallest disparity — a disparity so small it barely registers — is Virginia Beach. The city with the second biggest disparity is not far away — Washington, D.C.

“The Secret Shame,” published by Stewart’s brightbeam organization, relied upon work done by two political scientists who pooled data from seven large public opinion surveys to rank the nation’s biggest cities in terms of conservatism. The study then compared the educational outcomes of the seven most conservative and the seven most progressive cities.

“When we analyzed the achievement gaps between black and white students and the gaps between Latino and white students we found larger gaps than readers might expect from cities where progressive residents presumably hold the most political, administrative an cultural power,” says the report. “Our most progressive cities have made very little progress towards the fundamental responsibility of helping every student reach their highest potential.”

At one extreme is San Francisco, where Democrats and progressives have long prided themselves on efforts to uplift the underprivileged. Educators are dedicated to openness, tolerance, diversity and equal opportunity. Yet the black-white cap is horrifying. Seventy percent of white students score proficient in math compared to only 12% of blacks — a chasm of 58%. For math, the gap in Washington, D.C., is even worse — 62 percentage points.

By contrast, the conservative cities of Virginia Beach, Anaheim, and Fort Worth “have effectively closed the gap in at least one of the academic categories we looked at, literally achieving a gap of zero or one,” the study reports. “The politically conservative Oklahoma City has even turned the tables on our typical thinking about race-based gaps. There, students of color outperform white students on high school graduation rates.”

The study systematically ruled out other explanations for the differences between progressive and conservative cities — per-pupil spending, income inequality, poverty rates, percentages of white and black students, and other factors. “Of all the factors we looked at progressivism is the greatest predictor.” Remarkably, despite the obsessive attention that progressives give to closing the gap for lower-income students, the racial gap in both San Francisco and Washington, D.C. is worse for low-income students than for middle- to upper-income students.

It’s almost as if progressivism itself was causing the problem.

According to the study data, Virginia Beach is the third most conservative city with a population more than 250,000 in the country. Washington, D.C., is the second most progressive.

Remarkably, Latino (Hispanic) students out-perform white students in Virginia Beach. That finding is so remarkable that the authors deem Virginia Beach to be an outlier, even among conservative cities, and suggest that the large presence of the military might be responsible. “With many white, black and Latino children hailing from a shared background of having military parents, it could be that Virginia Beach is better situated to eliminate achievement and graduation gaps by race than other conservatives cities.”

Another possibility, not considered in the report, is that while Virginia Beach is legally classified as a city, human settlement patterns more closely resemble a suburban community. Whatever the case, Virginia Beach defies all stereotypes of progressive thinking.

Where does progressivism go wrong? The authors of the study do not try to explain how progressivism fails its minority students. or what conservative jurisdictions are doing right Rather, they urge progressive leaders to acknowledge the sad reality, spread the word, mobilize their communities, and develop plans to narrow the performance gaps. “Stirring words have done little to fix the stark disparities that exist between white students and their black and Latino peers,” the report says. “None of us, regardless of our political identities and affiliations, should be satisfied with impassioned rhetoric and token initiatives alone.”

Permit me to offer a few suggestions on where progresssivism runs off the rails.

These phenomena are highly corrosive. Progressivism, one is tempted to say, is a social disease. Insofar as Governor Ralph Northam succeeds in embedding progressive values and principles in Virginia schools, as he is working so assiduously to do, we can predict that the black-white achievement gap will be worst in school districts where those values and principles take deepest root.