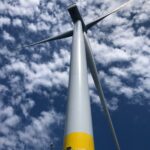 During an investor conference call, Blue blamed the 25% jump on “commodity and general cost pressures” as well as completion of design plans for transmitting electricity from the wind farm through populated areas in Virginia Beach to a substation where it can plug into the grid.

Blue said the impact on ratepayers — an extra $4 per month for an average residential customer — has not changed because the company is projecting that the wind farm will be more productive than originally thought, reports the Virginia Mercury.

Where have Virginians heard this before? Oh, I remember, this sounds reminiscent of the Silver Line extension of the Washington Metro to Dulles International Airport, which has encountered revised cost estimate after revised cost estimate. We can only hope that Dominion won’t encounter the same delays as the Northern Virginia commuter rail project, the second phase of which is now running about two years behind schedule.

Blue told the financial analysts on the call that $1 billion in federal tax credits will dampen the cost to rate payers. Also, once built, there are no fuel costs. Fuel savings could amount to $3 billion over the wind farm’s first 10 years. The price of natural gas, the main fossil fuel alternative to wind, has surged in the past year.

The wind farm is a critical piece of Dominion’s strategy to reach a zero-carbon electric grid by 2045, as mandated by the Virginia Clean Energy At. State Corporation Commission staff has estimated that the VCEA, which includes a large solar energy component, could increase electricity costs by $800 per household annually. That’s because backup and redundancy needs to be built into the grid to pick up the slack when the wind isn’t blowing and the sun isn’t shining.

Bacon’s bottom line: Is this the end of the cost increases, or could there be more coming? When Blue referred to “commodity and general cost pressures,” that sounds a lot like inflation. What commodity prices was he referring to? Steel accounts for between 70% and 80% of wind turbine mass, Fiberglas, resin or plastic (derived from petroleum) another 11% to 16%. Magnets in the generating unit contain rare earth elements, primarily neodynium and dysprosium. As the manufacture of offshore wind turbines accelerates globally, so will demand for and the price of components, especially the rare earth elements.

For all the happy talk from the Federal Reserve Bank that the current bout of inflation is due to temporary supply side disruptions, cost increases show no sign of subsiding. What inflation expectations are built into Dominion’s cost projections, and how sensitive is the latest estimate to continued rises in commodity prices?

It’s funny the way mega-projects work. Advocates have an incentive to lowball the costs to get political buy-in. Once the mega-project gets locked in politically, the price tag invariably ratchets higher. As long as the cost can be passed on to taxpayers, commuters or rate payers, the advocates don’t care.

Whatever the alleged environmental drawbacks of Dominion’s gas-fired power plants, you could say one thing about them — they were built on budget and on time. I don’t expect we’ve seen the last unpleasant surprise from the offshore wind farm.