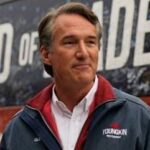 Scores of local and national media personalities are having a grand old time insulting the more than 1.6 million Virginians who elected Glenn Youngkin as our next governor. It’s the usual ignorant vitriol, spewed with such promiscuous regularity as to render it meaningless. This verdict of the people is attributed to “racism” of course, to “white grievance,” “white backlash,” “Trumpism,” “the ideology of whiteness” and so forth and so on. It’s just the nature of the “news” media these days — narrow and contemptuous.

People of goodwill are moving past all that, and the new governor-elect is leading the way. Youngkin is a good winner, an appealing combination of strength and humility, intelligence and determination. Gov. Ralph Northam deserves congratulations for greeting his successor with grace and civility, qualities that still matter.

Virginia Republicans have earned an opportunity to heal much of the pain and division spawned in recent years, but they must do so by emphasizing inclusion — a good word that’s been mistreated lately — and equal opportunity. Our new leaders must reach out to every kind of Virginian, while resisting the temptation to overreach the way Democrats in Washington have since January. They must emphasize pragmatic, incremental progress that improves everyday lives.
They must remember their 12 years in the electoral wilderness — frequently the result of an infatuation with scoring ideological points, which overshadowed fundamental principles that guided the party’s success for more than a century: individual liberty, free markets, modest government.

The window is narrow. The last time Republicans benefitted from such a favorable political environment, bolstered by strong statewide campaigns and relatively weak opponents, was in 2009. That year Bob McDonnell and Bill Bolling led the party to landslide victories. McDonnell won by 17 points, Bolling by 13. This year Youngkin and Lt. Gov.-elect Winsome Sears appear to have won by slightly more than 2 percentage points. Attorney General-elect Jason Miyares won by just over 1 percent. Virginia has changed and if victorious Republicans fail to enact policies that benefit a broad swath of Virginians, especially those struggling hardest to succeed, their time in office will be brief.

So despite what you’ve been hearing from the conventional media, the best description of Virginia voters this week is quite simple: They’re wise.

Bob Rayner is co-editor with Robin Beres of The Blunderbuss newsletter, which is affiliated with Bacon’s Rebellion. To read their “Hot Shot” editorials and other features not found on Bacon’s Rebellion, click here to subscribe.

This entry was posted in Elections and tagged Bob Rayner. Bookmark the permalink.