Only You Can Prevent Mega Fires 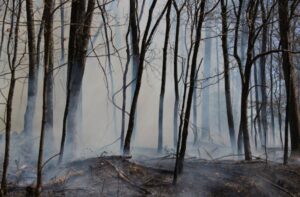 Virginia’s environmentalists seem determined to out-California California when it comes to fighting global warming and pushing for a zero-carbon economy. But they do seem unlikely to repeat the colossal error that has made the Golden State a cauldron of forest fire infernos. Rather than let understory vegetation grow out of control, Virginia foresters have been practicing “controlled burning” — a practice that is written about approvingly in The Virginia Mercury, which reflects the thinking of the bien pensants in Virginia’s environmental community.

Virginia has many advantages over California when it comes to combating forest fires. We get more rain, and we have fewer and shallower droughts. But our biggest advantage may be that our environmentalists are not insane. Excessively fixated upon climate change, perhaps, but not totally disconnected from reality.

Forest fires were part of the ecology of Southern Appalachian forests before the Europeans arrived, writes the Mercury’s Sarah Vogelsong. Indigenous peoples set fires to clear out the understory, leaving fewer, bigger trees and more room for wildlife to roam. Once upon a time, Virginia had herds of native bison and elk. When Europeans settled the state, they cleared woodlands to create farms. Then industrial-revolution demand for wood for construction and home heating led to wholesale deforestation. Horrified by the resulting barrenness and sterility, Congress set up the U.S. Forest Service to rebuild the nation’s forests; one of its primary duties was to help fight forest fires.

Under the fire-suppression regime, a new problem emerged. The Mercury explains:

“Forest density and canopy closure have increased to the point that fire-favored trees, especially oaks and pines, are failing to reproduce and are being replaced,” the U.S. Forest Service’s 2017 report found. “These genera are important for wildlife habitat, timber and aesthetics.” But as the older generation of big trees dies out, “they are being replaced by … species such as red maple that have colonized the shaded forest understory in the absence of fire.”

It wasn’t until the 1960s and 1970s that the U.S. Forest Service began realizing that fire had played an important selective function in the forests of yore. Oaks and other hardwoods that had once dominated southeastern forests were beginning to fade away as other younger trees blocked sunlight and prevented them from regenerating.

Preserving habitat and combating invasive species is a cause that environmentalists can rally around. So, in contrast to California where environmental groups such as the Sierra Club sued and lobbied to block the practice, Virginia environmentalists saw virtue — over and above preventing mega-fires — in understory burning. For the past 10 or 12 years, the Department of Forestry has conducted 22 burns covering more than 6,000 acres annually on average.

The controlled burns are highly choreographed and utilize new technology like drones that drop so-called “dragon eggs” to ignite the fires safely. Virginia has more woodlands than any time in the past century, and its forests are less vulnerable to devastating, out-of-control forest fires. Hopefully, California-scale wildfires are one environmental problem we will never see here.

This entry was posted in Agriculture & forestry, Environment and tagged James A. Bacon. Bookmark the permalink.