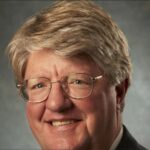 Governor-elect Glenn Youngkin has appointed Hampton Roads businessman Sheppard “Shep” Miller III as the next Secretary of Transportation. Youngkin’s press release offered no clues on how his transportation policy goals might differ from those of the outgoing administration.

“Shep will be an invaluable leader as Secretary of Transportation as we fulfill our promises to all Virginians to invest in roads, highways, and transportation infrastructure in every corner of the Commonwealth, so we can jumpstart job growth and keep Virginians moving,” Youngkin said.

The politics of transportation during the Northam administration have been relatively placid. Thanks to tax increases implemented by Governor Bob McDonnell and a slowdown in population growth and development of the Commonwealth’s Northern Virginia growth engine, transportation issues have been quiescent. Ever-attentive to the demands of the environmental lobby, Team Northam steered billions of dollars into railroads and mass transit, even as the COVID epidemic created an unprecedented slump in demand for rail and bus. But there has been no meaningful pushback on those priorities from any quarter.

Miller, a Norfolk native, is a successful businessman. He retired in 2017 as chairman upon the sale of KITCO Fiber Optics, a defense-contracting firm that was twice named as one of Virginia’s “Fantastic 50” fastest-growing companies. His expertise in transportation comes from years on the Commonwealth Transportation Board (CTB), Virginia’s transportation policy-making board. He served on the board between 2011 and 2014 during the McDonnell administration, and again since 2018 under the Northam administration.

I was acquainted with Miller as a kid — we grew up in the same Norfolk neighborhood — but we lost track of each other until he joined the CTB the same time that I was covering transportation under a Piedmont Environmental Council sponsorship. The CTB  was dominated then by a strong-willed Secretary of Transportation, Sean Connaughton, who courted controversy in cutting through red tape and getting road projects built. Miller, as I recall, stood out as one of a handful of CTB members who were actively engaged in deliberations. He asked a lot of questions. He demanded clarity.

I don’t recall Miller ever bucking the McDonnell administration on major priorities, but he wasn’t satisfied accepting anything just on the say-so of Connaughton or Virginia Department of Transportation officials. He insisted upon understanding the reasons for things, and he was never shy about speaking up or making his opinions known.

Serving as an “at-large urban” member, appointed to reflect general urban interests, not just the interests of Norfolk, Miller will bring a big-picture perspective to the job. I have not followed transportation issues closely for the past eight years, so I cannot say what particular priorities or preoccupations he might have today. With his iconoclastic approach to liberal pieties, Youngkin might wish to review the Commonwealth’s multibillion-dollar commitment to railroads and mass transit. I have no basis to know, however, whether Miller is inclined to do so or not.