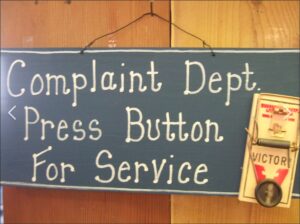 Whether you agree or disagree with Attorney General Mark Herring’s position on the case, a dispute between an unnamed individual with mental health issues and her Manassas landlords, Gia and Ernest Hairston, makes a fascinating case study. In a press release, Herring touts the outcome — the landlords paying the tenant $60,000 in compensation — as a victory for the disabled. Based upon upon the facts provided in the press release, it looks more like a victory for chronic complainers.

Here are the facts as contained in a Herring press release issued today. The tenant rented a condominium unit from the Hairstons in the summer of 2018. She told Mr. Hairston that she lived with a mental health condition that was currently under control. After moving in, she complained about the air conditioning system on very hot days and made requests for other repairs.

Mr. Hairston became frustrated by the maintenance requests, telling her that “any adult” would know better and that she was being “difficult” and “a problem.” He said the maintenance concerns were “all in her head.” To document the necessity for the repair requests, the tenant asked that any time the Hairstons came to the unit that her therapist or caseworker be present. After agreeing initially, Mr. Hairston then terminated her lease, giving her 90 days to move.

Mr. Hairston explained that the reason for the termination was because the tenant had “special needs” and couldn’t “understand, cope, or compromise.” Specifically, he stated: “[Y]ou needing to be with your therapist to talk to us whether through text, email or in person to handle business is a special accommodation whether you think it is or not. Adults and people that function normally without special needs don’t require that type of accommodation. It’s ok that you have these special needs. We just can’t accommodate you. You will be a problem for us. So it’s best you move. […] You have a hard time understanding, coping and compromising. It’s best we just part ways as soon as possible.

The parties agreed to a settlement in which the Hairstons paid the tenant $60,000 as compensation, donated $1,500 to the nonprofit Action in Community Through Service, and, as a condition of staying landlords, committed to attending fair housing training sessions for three years.

“Virginia tenants with disabilities deserve to be treated the same as any other tenants, without the fear of being discriminated against or treated poorly by their landlords,” said Herring in his press release. “Demeaning and outdated stereotypes about Virginians with mental illness have no place in housing transactions or frankly anywhere else in the Commonwealth. I hope this sends a strong message to all Virginia landlords.”

Bacon’s bottom line: The brief narrative in the press release omits crucial bits of information. How reasonable were the tenant’s requests for repairs? The only details proffered in the press release concerned the air conditioning. Apparently, the unit (or system) failed to keep the apartment sufficiently cooled a few days out of the year. Was the tenant making mountains out of molehills? Did she make incessant demands to fix trivial problems? The press release does not provide those specifics. Evidently, the Hairstons believed the complaints lacked merit.

Here is the central question: did the Hairstons terminate the lease because the tenant had a mental disability or because she was an exceedingly difficult tenant who happened to have a mental disability? “You have a hard time understanding, coping and compromising,” he said, apparently laboring under the illusion that he was not obligated to accede to meritless demands.

The tenant brought the disability issue into the picture when she insisted upon scheduling meetings when her therapist or caseworker could be available. Apparently, that was the straw that broke the camel’s back. After having his patience tried from previous encounters, Mr. Hairston was unwilling to accommodate that particular request.

He didn’t terminate the lease because the tenant had mental health issues; he terminated the lease because she was an exceedingly difficult tenant. The issue gets murky because, apparently, it was her mental health issues that caused her to be difficult. We don’t know this for certain because we don’t get the Hairstons’ side of the story, and we don’t know the precise nature of the tenant’s mental-health issues. But reading between the lines of Herring’s account, the Hairstons found her to be a problem tenant.

If my conjecture is accurate — and I’m willing to change my mind in light of additional information — Herring notched a big win for whiners and complainers. Here’s my advice to chronic kvetchers in disputes with their landlords: find a therapist, claim a disability, then threaten to sic the Fair Housing Office on them. The prospect of a $60,000 fine (plus legal fees) might persuade them to accommodate your demands.

This entry was posted in Housing, Mental illness and substance abuse and tagged James A. Bacon. Bookmark the permalink.