Metro Not Getting Back on Track Any Time Soon… Says Metro 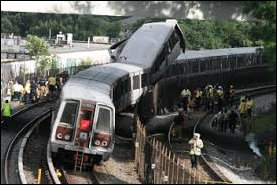 The pre-pandemic financial model for the Washington Metro, the largest mass transit system in Virginia, is not sustainable, and it’s time to re-envision the system to recognize the new traffic patterns, General Paul J. Wiedefeld testified to a Congressional oversight committee yesterday. Metro officialdom is scrambling to plug a another $500 million revenue shortfall stemming from declining ridership and lost fares.

The root of the problem: thousands of Metro riders, including federal workers who once comprised 40% of the system’s pre-COVID rush-hour customers, have opted to work remotely.

“It’s really mission impossible turning this around from a financial standpoint, and we may have to accept that it’s going to be a consistent money loser and a big money loser for decades and decades, but necessary to have our capital shown in the best way it can and also get the legions of federal workers … to and from their place of work,” said Rep. David Trone, D-Md., a subcommittee member, reports The Washington Post.

The Washington Metro has been a money pit for years, sucking up an ever larger share of Virginia transportation dollars allocated to mass transit. But Metro officials at least held out the hope that given enough money to address maintenance backlogs and safety issues the commuter rail system could be turned around. If Wiedefeld says Metro needs a new vision, you’d better believe that it needs a new vision. Indeed it may be time, after four years of the Northam administration indiscriminately dumping money into mass transit and rail projects, for a wholesale re-evaluation of mass transit across the state.

Even before COVID, Metro had been plagued by safety mishaps, erratic service, and declining ridership. Meanwhile, completion of Phase 2 of the Silver Line extension to Washington Dulles International Airport, managed by the Metropolitan Washington Airports Authority, is running more than two years late.

Of all of Virginia’s mass transit authorities, Washington Metro seemingly had the best odds of being financially successful. The urban core of the Washington region, including much of Northern Virginia, is the only place in the Old Dominion with sufficient size and density to make mass transit a viable economic proposition. Arlington County became a national success story in adapting its land use policies to concentrate development along its metro stops and working with landlords to encourage Metro ridership. What couldn’t be paid for with fares could be offset by higher real estate values along the stops.

But Metro suffered from intractable problems it never managed to solve. The union-protected workforce suffered from high costs and low productivity. Washington, D.C., “progressives,” who shared board-of-directors governance with representatives from Virginia, Maryland, and the federal government, pushed for lower fares. And for years, Metro failed consistently to budget sufficient funds to properly maintain the rail system. Trains ran off tracks. Cars were pulled out of service. Escalators stopped working.

The rise of Uber and other ride-hailing apps a decade ago was a warning sign that Washingtonians were not happy with Metro. The quasi-taxi services began siphoning off riders. Then, when the COVID epidemic struck, ridership fell off a cliff. No one wanted to ride in crowded rail cars and risk exposure to the virus. There was hope that riders would return when the epidemic subsided, but a funny thing happened. Thanks to the ubiquity of high-speed Internet, the maturation of collaborative technologies such as Microsoft Office 365, and the introduction of inexpensive meeting software such as Zoom, people discovered they could work productively at home.

Now that the COVID epidemic seems to be receding, there may be a rebound in rush-hour, office-bound traffic. But no one expects ridership to return to normal.

Metro has been kept afloat thanks to massive federal COVID-relief funding. What happens when that money runs out is anybody’s guess. If Metro can’t keep pace with basic maintenance, no one but the fare jumpers will want to ride it.

Wiedefeld was vague about what a  post-COVID vision might look like. He suggested that Metro could partner with private ride-hailing service such as Uber or Lyft. The only thing we know for sure: Metro needs more subsidies.

Once upon a time, mass transit made sense… sometimes. A coherent body of thought touted an urban future of higher-density and mixed-use development supported by mass transit. But that was before Uber. And before Zoom. The fundamental economic underpinnings of transportation have changed. Transportation policy needs to change along with it.

This entry was posted in Transportation, Uncategorized and tagged James A. Bacon, mass transit. Bookmark the permalink.