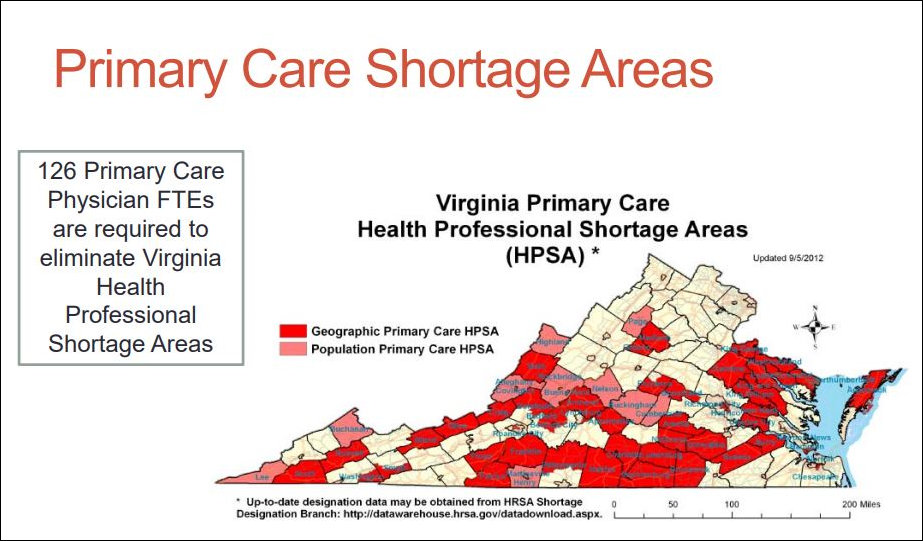 The Northam administration sold Medicaid expansion to the public in part by claiming that the net cost to Virginia taxpayers would be minimal. Uncle Sam would pay for 90% of the cost of extending medical coverage to up to 400,000 Virginians, and the state’s 10% share would be offset by savings in prisons, mental health, and other areas. What no one talked about, except in the fine print, was the necessity of increasing reimbursements to physicians.

The Richmond Times-Dispatch editorial page explains today why higher reimbursements for physicians are an integral and unavoidable part of Medicaid expansion:

Medicaid underpays its physicians, reimbursing them at only 71 percent of the rate they get paid by Medicare, and an even smaller percentage of what private insurers pay. As a consequence, only 63 percent of physicians accept Medicaid patients, and only 71 percent of those are taking new patients. So, when Medicaid expands eligibility to as many as 400,000 near-poor Virginians this year, many will find it difficult to find a primary care physician, and they’ll wind up seeking care in the emergency room, just like they always have.

The Department of Medical Assistance Services (DMAS), which administers Virginia’s Medicaid program, now is asking for $19.1 million in the second year of the next biennial budget for Virginia’s share of the cost to lure more docs into the program. The hope is that hiking reimbursements from 71% of the Medicare benchmark to 80% of the benchmark will induce a meaningful number of physicians to take more Medicaid patients.

How likely is that?

Virginia has about 25,000 full-time-equivalent physicians, according to “Virginia Physician Workforce: 2016” published last year by the Healthcare Workforce Data Center (HWDC). 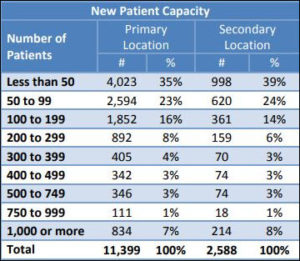 HWDC found that 57% of physician were accepting new patients at their primary office. Of those who are taking in more patients in their primary offices, 35% can accept no more than 50, while 23% can accept between 50 and 99 new patients. If I understand its presentation correctly (see the chart to the left) HWDC estimated a “new patient capacity” of about 14,000 at both primary and secondary locations. That’s a drop in the bucket compared to the expected influx of 400,000 new Medicaid patients.

The shortage is not likely to improve. Nearly 4,000 doctors, about 17% of the physician workforce, are over 65 years or older. Although many docs plan to work into their 70s, 8% of Virginia’s physicians plan to retire within two years, and 30% expect to do so within 10, estimates the HWDC.

If 8% of physicians retire in the next two years — about 1,000 per year — there are two ways, broadly speaking, to replace them. (1) working physicians can take in more patients, and (2) hospitals can recruit more doctors. 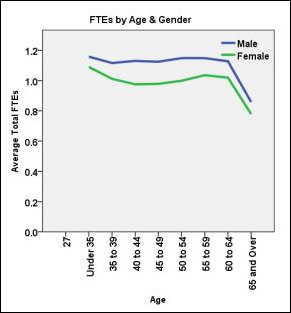 While older physicians are predominantly male, the younger generation of physicians is half female. That’s great for gender equality, but it stretches the profession even thinner because female physicians tend to work fewer hours than males (presumably because, as mothers, many are juggling professional and domestic responsibilities). As male physicians age out and are replaced by females, doctors on average will tend to work fewer hours, meaning they will see fewer patients. For this and other reasons, 2,531 doctors told HWDC they were planning to decrease patient hours compared to 2,183 who said they were planning to increase their hours within the next two years — a net of 348 doctors intending to cut back.

Another way to accommodate 400,000 more Medicaid patients is to train and recruit new doctors. According to HWDC data, Virginia medical schools granted 1,322 residencies over the past five years. That’s a pipeline of barely 600 per year. Assuming every Virginia resident stayed in Virginia (which they don’t), the number fall significantly short of the 1,000 or so doctors expected to retire. That means the gap must be filled by recruiting doctors from outside the state. How likely is that to occur? Who knows. That’s a big uncertainty.

Some regions of Virginia will be able to absorb the influx of Medicaid patients better than others. The major metropolitan areas have higher doctor-population ratios than the non-metros. Indeed, as shown in the map at atop of this post, a 2013 presentation to the Joint Commission on Health Care designated much of the state as “primary care shortage areas.” That presentation cited a shortage of 126 primary care physicians in those areas. 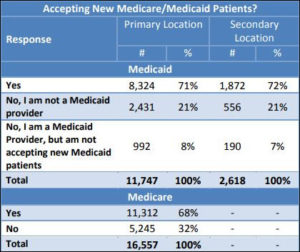 If physicians have limited capacity to accept new patients, whom are they most likely to accept — Medicaid patients for whom they are reimbursed at 71% of the Medicare benchmark, Medicare patients, or privately insured patients who pay a premium? Most physicians have compassion for the poor, but they have businesses to run, and it helps no one if they go out of business. It’s no surprise that almost 30% of physicians said they either did not accept Medicaid patients or were not taking in new ones.

How much will those physicians’ calculus change if DMAS bumps up their Medicaid reimbursement from 71% to 80% of the Medicare benchmark? Will urban and suburban docs take on more Medicaid patients? Will higher compensation induce more physicians to move into health professional shortage areas?

The shortage of physicians willing and able to treat Medicaid patients appears to be an intractable problem with no quick fix. I have no confidence that the DMAS proposal will have a meaningful impact. And I fully expect the Northam administration to come back to the General Assembly in a couple of years saying that more money is needed.

All of these matters were on full display for all to see, as the “Virginia Physician Workforce Shortage” presentation made abundantly clear in January 2017, almost two years ago. But in the rush to enact Medicaid expansion, Virginia’s political class and its enablers in the media ignored them. Medicaid “coverage” could prove to be meaningless for thousands. And lawmakers likely will be cleaning up their mess for years to come.

This entry was posted in Entitlements, Health Care, Poverty & income gap and tagged James A. Bacon, Medicaid. Bookmark the permalink.