When a State Corporation Commission staff analysis warned last year of $808 annual increases in Dominion Energy Virginia residential bills by 2030, that 58% increase was based on the existing deadlines set for Dominion’s conversion away from using fossil fuels.

Change the deadlines, change the cost. Shorten the deadlines by half, as Democratic gubernatorial nominee Terry McAuliffe is promising to do, and 2030 electricity costs will grow even higher.

The 2020 Virginia Clean Economy Act set a deadline of 2045 for Dominion Energy to meet a renewable portfolio standard of 100%. The deadline for Appalachian Power Company in the western part of the state is 2050, but it has far fewer generation assets than Dominion within Virginia. Under current law, Dominion only needs to be about 60% fossil-free and APCO 45% by 2035.

In campaign speeches and debates, McAuliffe has pledged to move both 100% deadlines to 2035, ten years earlier for Dominion and fifteen years earlier for Appalachian. That would completely upend years of negotiations between anti-fossil fuel state officials, environmental activists and the utilities, and throw most existing compliance plans in the trash.

Three factors will accelerate the customer bills for both utilities if a quicker timeline is imposed, somewhat by 2030 and significantly by 2035. 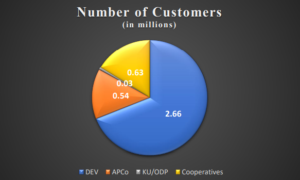 First, customer bills will have to reflect a faster build-out of planned new solar, wind and battery assets. The cost of each new unit appears on customer bills when operations begin. More will need to be in service sooner, which of course is what advocates want.

Recent Dominion filings project its renewable investments out to 2035, but the firm is not planning to reach all its renewable generation goals by that point. In Appalachian’s plan to comply with VCEA, an even higher portion of the needed investments were planned beyond 2035. In terms of impact, McAuliffe’s accelerated schedule might hit Appalachian customers harder.

Second, the companies may need to take ratepayer dollars and buy far more renewable energy credits (RECs) on the open market, especially if the renewable build-outs cannot accelerate to the new deadlines. Absent their own renewable power generation, the RECs achieve compliance. REC sellers may prove the biggest beneficiaries of McAuliffe’s idea.

Finally – and often forgotten – customer bills by 2030 (and certainly 2035) may include stranded costs from perfectly useful fossil fuel plants which get closed earlier than planned. Once approved and built, utilities are guaranteed to be paid in full for those plants, even if they close early.

How to compensate Dominion for eleven coal plants already closed early is a key argument in the current accounting review. It involves close to $1 billion in ratepayer cost, money paid for zero power production. Under current plans, most of Dominion’s newer natural gas generators are scheduled to remain online another 20 or 25 years. What will it cost to close them by 2035? Appalachian Power also has fossil fuel plants it could run past 2035.

Appalachian Power has not filed projected rate impacts for compliance with VCEA, but those are expected next year when it begins another integrated resource plan review. Its compliance depends on much smaller amounts of new solar power, onshore wind installations and some battery storage. It does not include the massive offshore wind facility that is central to the Dominion compliance costs.

The SCC residential cost estimate produced for Dominion by staff economist Carol Myers has become a common talking point for Republicans in the 2021 campaigns. It has been dismissed as too high by Dominion, but its own projection (also on the table above) exceeded $600 per year. Both are based on usage of 1,000 kWh per month, which is lower than the actual average for its residential customers’ bills, so add 10% immediately.

The campaign pitches usually don’t note that the projection involves much more than just the impact of the VCEA and includes costs from pre-2020 bills such as those dealing with coal ash disposal and burying lines. The overarching theme, however, is ending the use of coal and gas rapidly and replacing them with solar, onshore and offshore wind, and battery facilities to hold that energy when there is excess. There is every chance the SCC’s preliminary price tags on those future investments are too low.

Informative, huh? Click for larger view of this typical page from the SCC testimony.

The appendix filed with the SCC case documents gets into gritty detail over those costs, year by year until 2035. But the data cannot be seen because Dominion or others have requested it be kept secret. Myer’s testimony has page after page of redacted charts and tables. (See pages 35-49) If visible, it might prove the basis for a guesstimate on how much above $808 per year we might be looking at.

Lacking the data, just know this: It will cost more, much more, if the timetable moves left. Yes, some of that money will be spent building the plants and thus create short-term jobs but, remember, closing fossil plants kills many long-term jobs. Every construction paycheck will be coming from a higher family or business energy bill.