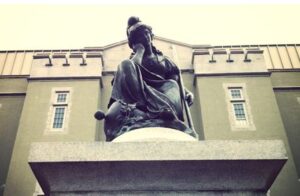 The Virginia Military Institute (VMI) is a hallowed institution to many. VMI men have a certain command presence that is rooted in realism yet rarely if ever accepts impossible as a status quo.

The things that make VMI such an institution are the intangibles. VMI’s storied Honor Code, her graduates such as General George S. Patton, the 1864 Battle of New Market, and the gallows humor that seems to prevail among most alumni. “They can’t kill you and they can’t send you back to the rat line” is a common refrain

This thicket of intangibles — honor and tradition — are what makes institutions such as VMI unique and truly Virginian.

In the wake of Governor Ralph Northam’s blackface scandal, a handful of individuals — and it is a handful — have put VMI and her alumni in their path. Nothing is redeemable, nothing is sacred, all must be exposed to the harsh light of wokewashers and their panels of inquisitors.

VMI has long been in the spotlight. VMI’s long resistance to admitting women to its ranks defined the 1990s before VMI ultimately relented. VMI’s long tradition of imposing the strict rigors of honor have long bewitched the more progressive elements in society for whom honor is a foreign land.

VMI’s collective focus on personal and academic excellence seem to have carried the open threat to modern day Athenians. The demos simply cannot stand the aristos, and VMI is if nothing an institution dedicated to producing excellent souls.

Thus the VMI Commemorations and Memorials Naming and Review Committee sponsored by the Northam-led Board of Visitors has begun the process of dismantling the Institute, starting with three targets in mind:

• Virginia Mourning Her Dead will be recontextualized. Instead of commemorating the VMI cadets lost during the War, the monument will now have its plaque removed and replaced so as to honor the loss of all combatants in every war.
• The New Market Battle Mural will be removed. The committee believes the mural should be preserved, but it declined to suggest where it should be preserved. The commission emphasized that future visitors will be given context in the future as to what the Battle of New Market actually represents.
• Stonewall Jackson will no longer be honored for his martial accomplishments. The tradition of saluting the Jackson status having been extinguished, the Jackson Arch will now refer to Professor Thomas Jackson rather than Stonewall Jackson. Moreover, the quote will receive attribution to William Alcott and the Rev. Joel Hawes respectively. The embossed “Stonewall Jackson” inscription above Jackson Arch is to be physically erased. Jackson Memorial Hall will be renamed with a recommendation to be offered before the BOV’s September 2021 meeting.

What makes all of this more shocking is that Thomas Jonathan Jackson isn’t remembered for being a professor. The young men at the Battle of New Market were not remembered for the sole purpose of defending a political narrative (they were literally preserving their neighbors from being burned out as the Federals did to the Valley in 1864 where Sheridan bragged that a crow flying over the devastated land would have to carry rations.

Perhaps what is required here is a more modest proposal. Perhaps VMI needs to close as an institution entirely.

At some point in time we reach a condition where VMI (and other institutions) start becoming the old Ship of Theseus. Replace a plank, it is the same ship. Replace a few more, is it the same ship? Replace every plank and every sail. Is it still the same ship?

Here we have a different problem.

Replace the Jackson Arch, but not replace in truth, but completely alter the Jackson Arch while still calling it the Jackson Arch. Sandblast Stonewall Jackson’s name off of Jackson Hall, but allow the hall to still function. Change the identity of Virginia Mourning Her Dead to encompass all VMI cadets and not just the conflict where VMI was most directly impacted and involved.Replace and alter the VMI Honor Code by removing the tradition of naming those expelled. Replace one superintendent with another. Replace the statue  of Stonewall Jackson with… well, nothing at all.

We can even create scholarships whose sole criteria for merit is based on race.
At some point, we are in a Catch-22 here. If VMI as an institution is so deeply problematic in the eyes of its critics, is the Institute worth saving? On the flip side of the equation, if the changes to VMI are going to so radically undermine the heart and spirit of the Institute as so many VMI alumni believe is the case in order to place it on the altar of Critical Race Theory to atone for past sins, will the Institute’s long emphasis on honor and tradition survive?

One can easily see where the conflict lies.

If the wokes intend to knuckle VMI under, perhaps there is a greater question at stake here: is VMI worth saving?

Can it ever be altered or adjusted to any degree that will preserve what it means to be a VMI graduate? Can honor and tradition be preserved in an environment where the very words themselves — honor and tradition — are routinely attacked as relics of white privilege and racist institutions?

In this, we are at an impasse.

If VMI is worth saving, then it is worth preserving — whole and in toto, its traditions restored and its concepts of honor maintained. VMI is producing heroes at every graduation ceremony. Build more memorials, install more plaques, show that our institutions — never perfect — can actually be refined over time.

Yet if the Virginia Military Institute is a modern day Ship of Theseus? If the CRT critics are fundamentally correct in their opinions that — at core — there is no redeeming value in the history, traditions, sacrifices and honor of the Institute? Then why wait? End the drama and at least preserve the memory of VMI.

The slow androgynization of a once venerable institution at the hands of postmodern Red Guards in their war against “Old Ideas, Old Culture, Old Habits, and Old Customs” might carry the name of VMI, but it will not be VMI.
If the endgame of the Jacobins is to destroy what makes VMI special? One very modest proposal is to simply end the drama.

Of course, that would preserve at least the memory of VMI.

That — it seems — is the intolerable sin that today’s Red Guards are seeking to extirpate from our ranks.