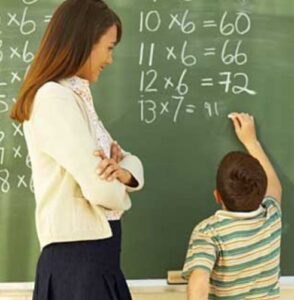 This is fifth in a series of articles about Virginia’s Standards of Learning assessments.

In 2011 the Virginia Board of Education added a new criteria, Standard 7 Student Academic Progress, for evaluating teachers and administrators. Previously, 100% of the criteria used to evaluate educators had consisted of inputs — lesson delivery, lesson planning, school improvement planning, etc. — with no consideration of student outcomes. A teacher who arrived on time, delivered a captivating lesson during the principal’s classroom observation, and submitted impeccable lesson plans each week could receive an exemplary evaluation — even if his or her students failed to pass a minimum-competency test of grade-level standards, the Standards of Learning (SOLs), at the end of the year. Standard 7 changed the game by giving 40% weight to student outcomes.

Even with the new measure of student outcomes, evaluations did not always correlate to student outcomes. Many divisions implemented a pre-test/post-test process, which was intended to measure student progress over the course of the year. The pre-test, consisting of content that would be covered during the year, was administered at the beginning of the year and the post-test at the end. As one would expect, students always performed better after being exposed to the material than after. Most divisions considered this improvement a sign of student growth.

The problem with the pre-test/post-test scheme is obvious — students could “show progress” but still fail to meet the standards required to advance to the next grade. An analysis of the relationship between teacher ratings and SOL outcomes found in one division, for instance, that 45% of the teachers who had exemplary evaluation ratings and 40% with proficient ratings had fewer students passing the SOL test than is required for the school to be accredited (75% in English and 70% in other core areas).

Wise County implemented a rigorous version of aligning evaluations with outcomes in 2012. SOL pass rates improved from 26th in the state in 2011 to 16th in 2012 (out of 132 public school divisions). Wythe County implemented a number of instructional improvements, including revamping the evaluation process in 2016 (as well as implementing the Comprehensive Instructional Program). SOL outcomes improved from 58th in 2015 to 13th in 2016. Both divisions have continued to improve their state standings since then.

Unfortunately, the Virginia Board of Education has moved in the opposite direction over the past few years. Focused on equity issues, including the persistent achievement gap between racial/ethnic subgroups, VBOE approved updates to guidelines that reduced accountability for student outcomes. Currently, according to the guidelines, student outcomes are “not the least weighted of the performance standards or less than 1 (10 percent); however, [they] may be weighted equally as one of the multiple lowest weighted standards.”

Schools and school divisions are entities, not individuals. Schools and divisions do not work with students to learn academic skills necessary to be successful in life. Teachers do that. Principals lead and support their teachers to make sure that happens. Superintendents make sure principals have the support and teachers have the resources they need.

Schools and school divisions cannot be held accountable for much of anything. Virginia’s school accreditation process attempts to hold schools accountable for student outcomes, but we have many examples of schools whose students perform below acceptable standards year in and year out. Unless individuals are held accountable, there is no real accountability. If a school needs 75% of the students to pass English SOL tests and 70% in other content areas to be accredited, and the principal and teachers don’t pull their load, accreditation won’t happen.

There are some pitfalls to holding individuals accountable. For example, students take their first SOL tests in third grade. If the Kindergarten, 1st-grade, and 2nd-grade teachers don’t give students rigorous instruction and support, a 3rd-grade teacher doesn’t have much of a chance getting their wards to pass their SOL tests. Similarly, if a school board overturns a principal’s decision to discipline a teacher for a serious infraction, then other teachers learn that they can do as they please. In such instances, it would be unconscionable to hold the 3rd-grade teacher or the principal accountable for students’ outcomes.

From the individual educator’s perspective, the experience in Wise and Wythe was positive. One problem that gets under the skin of hard-working educators is knowing that colleagues are not pulling their share of the load. Knowing that everyone is actually being held to the same performance standard is comforting. Teachers also buy into the system when students arrive in class each fall more proficient in their prerequisite skills than in the past.

When Wise and Wythe counties updated their accountability systems to tie educator evaluations to student outcomes, they did not experience a massive overturn in personnel either due to firings, disciplinary actions, or educators choosing to go elsewhere. The administrators in those divisions worked diligently to explain why the evaluation goals were reasonable and attainable. Teachers and staff internalized the new expectations, and they produced better results.

If we wish to eliminate the achievement gap, we must hold educators more accountable, not less, for student outcomes. As was demonstrated in “Poverty Not Destiny for Educational Performance,” and “How the Best Teachers Help At-Risk Students Succeed,” helping at-risk students may not be easy but it is achievable. If we downplay the role of individual student outcomes in educator evaluations, we cannot expect better outcomes for the educational system as a whole.