Is It One Hour Back or One Hour Forward? 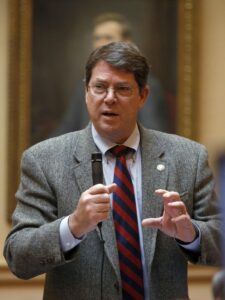 The Virginia General Assembly debates a lot of important bills. Nevertheless, most residents of the Commonwealth probably do not feel most of these bills affect them personally and do not have an opinion one way or the other.

However, occasionally, the legislators will take up a bill that is simple, affects everyone, and about which nearly everyone has an opinion. On Tuesday, the Virginia Senate considered such a bill. It dealt with that foolish requirement to change our clocks by one hour twice a year.

Sen. Richard Stuart (R-King George) had SB 1017, which would have made daylight saving time in effect all year in the Commonwealth. It was contingent upon Congress authorizing states to do so. In explaining his motivation for introducing the bill, he said that, quite frankly, he is tired of having to change his clocks twice a year. He realized that there is a division among folks as to whether it should be standard time or daylight saving time. He said that he likes to have an extra hour of daylight when he gets home from work, so he chose that approach. He went on to point out that there is a consensus in the medical profession that changing the times twice a year has significant medical consequences.

There was considerable debate on the Senate floor. The opposition came from Democrats. They did not oppose the general idea of having one time frame all year. They were worried about the consequences of surrounding states not following suit. Sen. Chap Petersen (D-Fairfax) provided a hypothetical example of his having a court appearance in Fairfax in mid-morning, one in D.C. in early afternoon, and one in Maryland in late afternoon. If all three jurisdictions were not using the same time framework, it would be almost impossible for his executive assistant to ensure that he was in the right place at the right time. (Sen. Stuart replied that he thought Sen. Petersen was underestimating the ability of his executive assistant.)

Other Democrats weighed in with other hypothetical examples. They all agreed that it made sense to use one time frame for the entire year, rather than changing twice a year. However, they declared that Congress should be the one to mandate the change in order to ensure uniformity among the states. (The U.S. Senate agreed unanimously last year to make daylight saving time permanent year round, but the House failed to report the bill out of committee for a floor vote.)

Republicans replied to the Democratic criticisms by saying that most of their constituents liked daylight saving time and did not want to have to change back and forth. They also contended the problems raised by Democrats were overblown.

Arizona opted not to adopt daylight saving time and, thus, for a large part of the year is out of sync with its neighbors. Somehow, it has managed to survive. No one in the Senate brought that up. Of course, Arizona does not have a section of its territory home to a large legal and business community bordering a similar community in another state.

This entry was posted in General Assembly, Uncategorized and tagged Dick Hall-Sizemore. Bookmark the permalink.