How Hillsboro Reinvented Itself… with Government Grants 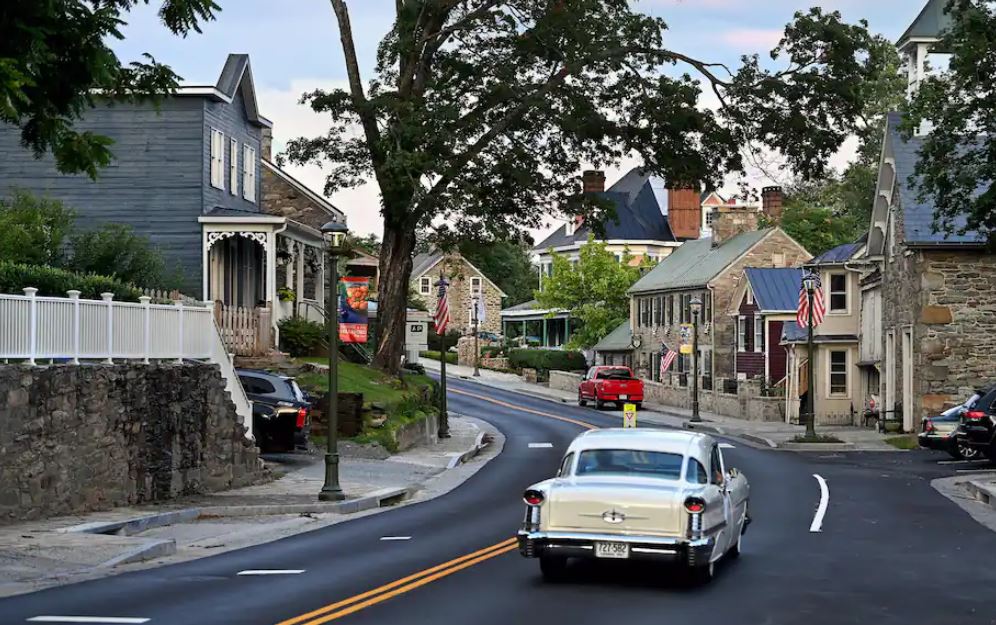 Hillsboro in western Loudoun County is a rural success story, reports The Washington Post. Over the past couple of years, the town of 120 has transformed its main street, a 0.7-mile stretch of Route 9. The addition of sidewalks made the community’s main drag inviting to pedestrians after having been rendered untraversable by the 17,000 vehicles, many of them conveying West Virginians to jobs in the Washington metropolitan area, that passed through every day.

Foot traffic at the Stoneybrook Farm and Market has more than doubled since early 2020. Kids can walk to class. Residents stroll instead of drive to the town’s Friday night concerts. The tiny shopping district is more inviting to the many visitors to the area’s wineries and breweries. Residents are upgrading their homes, and local businesses are expanding.

“It was hard to walk anywhere before. It felt like all you could do is drive to your house, get in your car, get out of your car, get in your car and drive somewhere else,” said Paul Hrebenak, who moved to Hillsboro a year ago. “Now you can walk across the street to your neighbor. You can walk the dog up the street and run into people and sit and chat on the sidewalk, rather than on the side of a busy highway.”

Hillsboro is the perfect illustration of what Bacon’s Rebellion has long advocated as a central part of any rural revitalization strategy — turning hamlets and small towns into walkable communities. There’s just one problem: The Hillsboro model is not replicable anywhere else — unless other communities can figure out how to raise the equivalent of $280,000 per resident in state, federal and local grants.

According to the Post, Mayor Roger L. Vance and Vice Mayor Amy Marasco managed to transform the town by securing $34 million in government grants. Besides the road and sidewalk improvements, outside funds have paid for laying fiber optic cable for broadband, moving overhead utilities underground, and upgrading the storm-water, drinking-water and waste-water systems. Vance and Marasco, who receive no pay, submitted more than 30 grant applications, networked at regional and state transportation events, and then acted as project managers when the money came in.

As drivers approach the town, they must slow from 45 mph to 25 mph before entering the first roundabout. Sidewalks, parking areas, lighting, raised crosswalks, markings and signs help keep traffic moving slowly until exiting the second roundabout on the other side of town, says the Post. It is impossible for cars to speed through town, so pedestrians feel safer when walking on sidewalks with little space between them and the passing cars.

Bacon’s bottom line: Hillsboro residents owe a lot to the dogged efforts of their unpaid mayor and vice mayor. Whether elected officials in other rural Virginia communities can duplicate their success is doubtful. For starters, the $12 million from the NVTA was made possible by the fact that Northern Virginia has a regional transportation authority funded by a regional gasoline tax. Unless a town is located in a mostly mainly urbanized region with such an authority, that revenue option will not exist. The other $19 million came from Loudoun County, which has the highest per capita income of any county in the United States. Loudoun has resources to spare that poor Virginia counties do not.

But everyone can learn from Hillsboro’s positive experience. It may take 20 or 30 years for other communities to accomplish what took Hillsboro barely two (not including the years of networking and applying for grants), but poor towns and hamlets can get there eventually if they create a plan and stick to it. The payoff in livability is immense. The increase in business opportunities is pure gravy.

This entry was posted in Land use & development, Transportation and tagged James A. Bacon, Rural development. Bookmark the permalink.