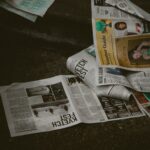 If you think The Virginian-Pilot is just a shadow of what it once was, just wait.

It may get worse.

Perhaps you heard, Alden Global Capital – a hedge fund that Vanity Fair once described as “the grim reaper of American newspapers” – is poised to buy The Tribune Publishing company, the parent of The Pilot, The Daily Press and 75 other newspapers.

Terrible news for Southeastern Virginia, which could find itself essentially newspaper-less in the future.

This move has been in the works for more than a year. The New York Times reported the alarming news this way:

Alden, a hedge fund that has already amassed a media empire of roughly 200 newspapers nationwide, made its first big move on Tribune Publishing in 2019 when it took a 32 percent stake, making it the publisher’s largest shareholder…

Now Alden’s endgame is coming into sharper focus. In a Dec. 14 letter to the Tribune board that became public in a federal regulatory filing on Thursday, Alden proposed buying the Tribune shares it did not already own for $14.25 apiece. That would be 11 percent more than the Wednesday closing price for Tribune, a publicly traded company…

Revenue for the local news industry has plummeted over the past 15 years as readers have increasingly favored getting the news on screens rather than in print newspapers. Alden and other hedge funds have nonetheless been able to wring profits from newspaper chains through austere management practices, and the finance industry has driven a wave of consolidation in the news media business.

“Austere management practices” is a polite way of saying that hedge funds like Alden buy struggling newspapers, slash costs to the bone and slurp up advertising revenue, vampire-style.

This does not result in good journalism. Then again, that doesn’t seem to be the goal.

In a recent story, The Washington Post described Alden’s business model this way: “Alden has made a business out of gobbling newspapers, ruthlessly cutting costs and gutting the staff and then, cutting even more when the product is invariably damaged.”

The Tribune company itself has pared down both The Daily Press and The Virginian-Pilot. Neither of the newspapers have physical offices any more. The Pilot’s building on Brambleton Avenue in Norfolk was sold to a developer more than a year ago. The Daily Press offices were closed earlier this year.

The reporters who remain on staff after more than a decade of layoffs and buyouts are working from their homes. If they can afford homes, that is. They may be working out of their cars.

Yes, I hear from many of you who are disgusted with the liberal editorials in The Virginian-Pilot. You lament the lack of comprehensive local coverage. Still, the small staff is working hard and without a net. They need reinforcements, money and experienced editors. They do not need even more “austerity” measures.

For those who remember The Pilot when it was one of the great dailies in America, the place where all of Tidewater went for in-depth reporting about everything from city halls to the military to shenanigans in Richmond, this latest development is devastating.

The Virginian-Pilot was the largest newspaper in Virginia for decades with bureaus in many cities and aggressive investigative reporters who collected scalps without regard to politics or special interests. The journalists won awards and put people in prison with their excellent reporting. They also got a few out of jail who didn’t belong there.

Corrupt politicians and businessmen can breathe a sigh of relief once a hedge fund is running the show. After all, a limp newspaper, drained of its resources, is nothing but a paper tiger.