The U.S. Department of Education requires every state to annually report high school graduation rates. Those data, along with students’ performances on state assessments in subjects such as mathematics, English, and science, along with other measures, are also used to determine annual accreditation ratings.

The VDOE’s website includes the Superintendent’s Annual Report where one can find a wealth of information at the state, division, and school levels.

At first glance, the spreadsheet in Table 5, Diploma Graduates and Completers, looks to be a source of interesting graduation data. The 2022 report gives the diploma counts for 2022 and the fall memberships for 2019. However, calculating the federal diploma rates from those data shows a 203.6% rate for Radford and 151.8% for Hopewell.

(Well, they did warn us: Footnote 1 says “No adjustments have been made to reflect the mobility of the population.”)

In contrast, the Cohort Graduation Rates come in a handy database and those rates deal with movement in and out of the schools. The database again gives us the 2022 graduates as a percentage of the 2019 enrollment.

Note: Economically disadvantaged (ED) students typically score lower on the SOL tests (by ca. 10-15 points, depending on the test) and graduate at lower rates (by ca. 10 percent) than their more affluent peers (Not ED). As with the SOL pass rates, the school and division diploma rates thus are pulled up or pushed down by the percentage of ED students. In short, schools and divisions with larger numbers of ED students are punished by those measures. So, the data below are division averages for each group.

Further Note: VDOE likes to report an “On-Time Graduation Rate” that is “adjusted” (i.e., boosted) to account for limited-English speaking and disabled students. To their credit, the feds want to know the “Federal Graduation Indicator” that counts only the standard, advanced, and IB graduates. Data below are the Federal rates.

Final Note: VDOE suppressed data for Highland, Lunenburg, and Lexington. Those divisions are absent from the data below.

Let’s start with the distribution of Not ED graduation rates. 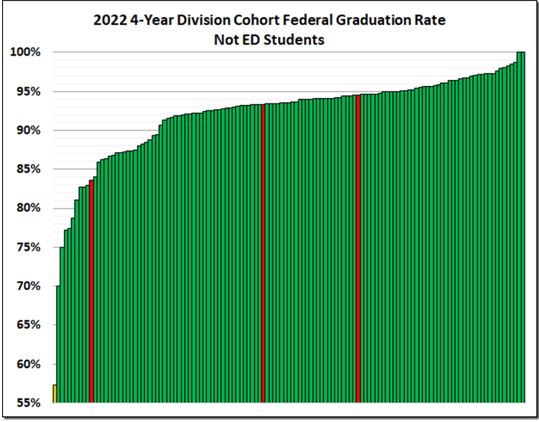 Richmond is the gold bar. The red bars are the peer cities, from the left, Norfolk, Newport News, and Hampton. The division average is 92.09%.

Next, the ED data. 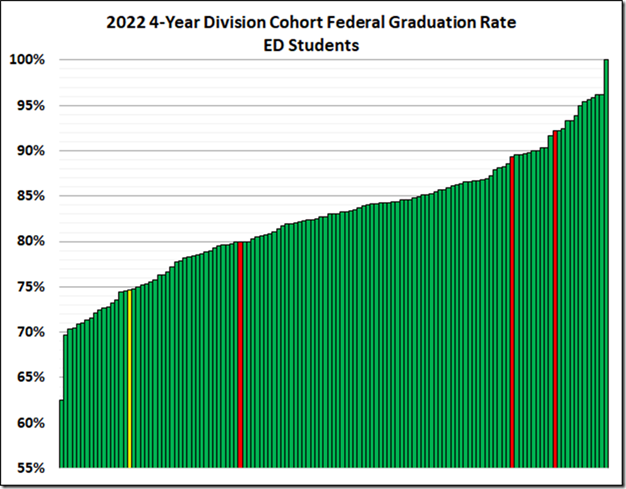 As an attempt to corral this plethora of data, here is a plot of the Division ED v. Not ED rates. 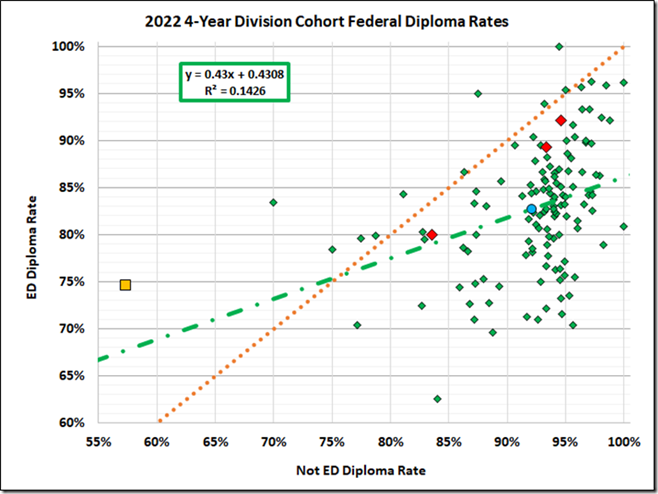 The green dash-dot line is the least squares fit. The R-squared datum confirms what our eyes tell us: There is a lot of scatter in these data but a clear trend toward larger Not ED/ED difference as the Not ED rate increases.

The gold square is Richmond. The red diamonds are the peer cities, from the left, Norfolk, Newport News, and Hampton. The aqua circle is the division average.

As you can see, Richmond leads the parade of divisions where ED students graduated at higher rates than their more affluent peers. 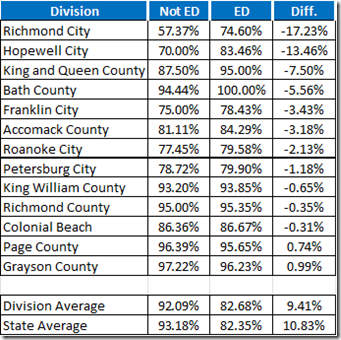 Beyond the 17-point difference, note again the egregiously low Richmond graduation rates. Otherwise, this list runs to medium-sized and smaller cities and to rural counties.

At the other end of the scale, here are the divisions where the Not ED rate was higher than the ED by more than 15 percent. 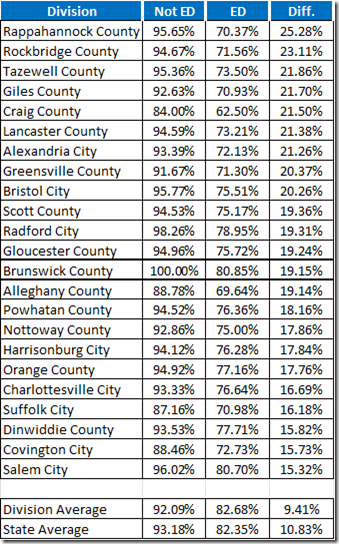 With some exceptions (notably Alexandria) the large Not ED/ED differences come in rural counties and smaller cities.

Finally, here is the entire list, sorted by division name.

John Butcher is a retired attorney living in the Richmond area. This column has been reprinted with permission from Cranky’s Blog.