Finally, The SCC Is Full Strength 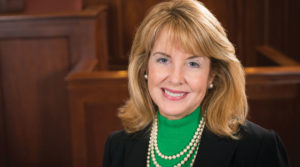 Former Chief Deputy Attorney General and Circuit Court Judge Patricia West is heading to the State Corporation Commission and the only question it raises is, why did the Republicans feel compelled to ram her election through with such speed?

Was the coalition that fragile?

West apparently has not practiced law in front of the Commission on behalf of clients, and certainly has not lobbied the General Assembly on behalf of regulated clients.  Her campaign contributions are modest.  She has a long resume of leadership posts around state government, and if she has expressed strong opinions on any of the various regulatory controversies of the day, no one is aware.  But people forget most of what the SCC does is not controversial.

Her interview in front of the joint Commerce and Labor Committees was not streamed and archived, so exactly what was asked and answered may be lost to history.  A year ago, when current Commissioner Judith Jagdmann was interviewed, her answers were not so important as the shows of bravado put on by some of the legislators seeking to dictate outcomes of future cases.

Based on the news reports, West gave the same answers given by thousands of judicial candidates in front of hundreds of such panels over the years:  you people write the laws, we judges enforce them, and if the laws or facts are in conflict, that’s when we get to earn our pay.  The SCC is just three judges dealing with a set of laws the General Assembly has tangled into a mess and a set of facts insanely complicated.

Judge West comes in with no battle scars in these wars and is likely to make her own decisions and do the job the correct way.  Democrats were stung by the method of her appointment and blustered that her reappointment in a year or so might be in doubt.  Prediction:  She’ll finish out her long career of Virginia service as part of that important agency when she decides to leave, and all will praise her service.

This entry was posted in Courts and law, General Assembly and tagged Stephen D. Haner. Bookmark the permalink.