Feds: Whales Must Be Protected from Turbines 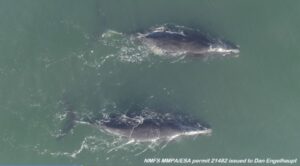 Soon after a group of opponents to proposed East Coast offshore wind projects hired a law firm with environmental regulation expertise, the federal Bureau of Ocean Energy Management (BOEM) announced a new plan to protect North Atlantic Right Whales and put it out for public comment.

The opponents, with Thomas Jefferson Institute for Public Policy as part of the coalition, had been pointing to the impact of the project on the whales for months and this protection and mitigation plan admits the problem is significant.

One apparent result of the announcement will be a major delay in publication of the draft environmental impact statement (EIS) on Dominion Energy Virginia’s Coastal Virginia Offshore Wind (CVOW) project off Virginia Beach.  The EIS was supposed to be available this past August, and once published is expected to be the focus of extended comments and perhaps litigation from opponents.

The ongoing debate at the Virginia State Corporation Commission over consumer price protections (a decision should come soon) is not the last hurdle to construction of the $10 billion project, with a much higher cost now under discussion.  That EIS clock is not even running yet.

Other projects along the East Coast are a bit further along in that EIS process, but their location in the known migration corridor for the endangered right whales is a complication for all of them. The BOEM document includes a series of maps (i.e. here and here) showing the density of the whale populations mapped against the proposed project areas.

BOEM is quite clear its primary goal is not protecting sea life but complying with President Joe Biden’s Executive Order 14008, which calls for the development of 30 gigawatts of offshore wind turbines by 2030. Dominion’s 176 turbine, 2.6 gigawatt project is less than 10 percent of that total. By one count the planned projects include 3,400 turbines, other transmission structures and almost 10,000 miles of submarine cable.

BOEM asserts in the document that the steps it proposes solve the problems those create for the whales, while at the same time calling for more observation and continuous improvement to the protection plan.  The thousands of comments received so far for or against that assertion have not been released.

The right whale population (about 340 individuals) is so reduced and stressed that the federal standard is that not one can be accidentally killed. The loss of even one will accelerate the path to extinction. That has already been established by the National Marine Fisheries Service in a 2021 Potential Biological Removal (PBR) ruling.  That “zero take” PBR is also behind an ongoing regulatory effort to reduce the speed of commercial shipping in the corridor, also being resisted by that industry.

Protecting the whales is now becoming a problem for New England’s lobster fishermen, fighting federal regulations against certain fishing methods that risk entangling the giant mammals.  A federal court recently ruled against the fishermen, and retailers are under pressure to eliminate the product. Whole Foods did.

Writes Virginia attorney Collister Johnson for the Committee for a Constructive Tomorrow, in a comment filed with BOEM:

When the PBR (which prohibits the human killing of a single whale) is combined with the fact that BOEM has no knowledge of the number, location, or travel path of any individual whale, the entire Strategy is doomed to failure.

No amount of “mitigation,” “minimization,” “reduction,” or “observation” can succeed in complying with a PBR where zero tolerance is the standard. Indeed, this issue has been adjudicated recently by the U.S. District Court for the District of Columbia. In Maine Lobstermen’s Assoc. v. NMFS, Judge Boasberg ruled that where the PBR is effectively zero, any ocean activity authorized by BOEM which includes the continuation of human caused (whale) mortality is ipso facto arbitrary and capricious….

In summary, BOEM cannot research, collaborate, minimize, mitigate, monitor, avoid, evaluate, or otherwise strategize its way out of a zero take marine environment for the (right whale). Therefore, the Strategy is a huge waste of time and resources and doomed to failure.

Under these circumstances, litigation appears to be inevitable.

For the Dominion project, litigation produces delay and delay will increase the ultimate cost to Dominion’s customers, already beginning to pay for the project on monthly bills.

A separate but similar federal review is underway because a company is seeking a permit for extensive underwater surveys off New York State, potentially useful for future wind plans, which could also result in the “incidental taking” of marine life.  More public comments are being sought. The assumption is that some loss of wildlife is likely, so the permit is needed.  This survey activity is far less invasive than building and maintaining thousands of structures which remain in place for decades.

Industrial development of the oceans on this scale is going to harm wildlife, with right whales the most vulnerable species. Period. The response from the climate alarmists?  Attack the messengers, of course, as in this Huffington Post article that dismisses Johnson and others as “climate deniers” and claims they are just tools of the fossil fuel industry.  In fact, the money flow is stronger between the wind industry and the environmentalists willing to kill off the whales.

As a mental exercise, imagine the debate if 3,400 turbine structures, 500 to 800 feet tall, and ten thousand miles of crisscrossing high voltage cables were proposed for the length of the Appalachian Mountains from New York to North Carolina. Nobody could dispute those would be bird and bat blenders. Surrounding landowners by the tens of thousands would decry the changes to the view. Which is why the push is to put them offshore instead.