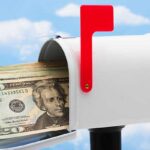 What will you do with your $110?  Thanks to the conformity revenue flood, it’s coming.

Checks are expected to arrive in October for most Virginia taxpayers, the most important piece of campaign mail they’ll get before November’s election.  The $110 extra refund, $220 for a married couple, is the General Assembly’s response to the huge influx of new state tax revenue created by conforming state rules to recent federal changes.

In a presentation to the Senate Finance Committee Tuesday, repeating an earlier discussion with the House Appropriations Committee, Secretary of Finance Aubrey Layne reported that earlier state estimates of the financial windfall are proving to be correct.  With the end of the fiscal year just days away, this is the time of year when receipts are being examined daily, if not hourly.

He used the phrases “right on” and “dead on” more than once, adding “I don’t see anything that’s going to upset this.”  As of the end of May the state’s revenue had grown 7.9 percent year over year, against the forecast of 3.3 percent.  That extra 4.6 percent could exceed $900 million and $1 billion wouldn’t surprise.

Up to $420 million of that will go out in those obviously timed refund checks and much of the rest should be placed in a Taxpayer Relief Fund for further tax reform efforts.  Who might not get a refund?  How much will be in that Taxpayer Relief Fund?

Before answering those, here is Layne’s slide presentation from Tuesday and here is the more detailed set of tables on his website.  If the previous pattern holds, the updates for June and the full fiscal year won’t be shared until the Governor makes his formal report to the General Assembly August 20.

You get the bonus refund whether your state taxes went up or down due to the federal changes, paid for by those whose taxes went up, often far more than $220. Of course, not everybody gets a refund.

The first thing that might prevent someone from getting the bonus refund is missing the July 1 deadline for filling a completed tax return, as previously reported.  There are plenty of valid reasons why a taxpayer might legally extend filing the return into the fall, but none of them will work if you want that check.  Layne reported he’s already being asked by his certified public accountant friends to let those people get their refunds next year instead. The law didn’t allow that (expect a bill.)

But you also won’t get a refund if you owed no tax.  You might be a poor person who used the earned income tax credit to wipe out your liability, or a rich person using a land conservation or education scholarship tax credit.  Both are out of luck, although $220 would have done more for one family than the other.

If your return is filed but flagged for fraud review or for errors, the refund might not show up before the election, but Layne said those refunds will go out once the issues are resolved.  But if your refund is tagged by the state’s debt set-off collection program, the $110 or $220 will go toward your unpaid tax, child support or traffic fine debts.  You’ll get a letter notifying you that the debt was reduced or paid.

None of these complications would have been needed if the General Assembly had simply done some real tax reform for this fiscal year, as it is now clear was very possible.  It could have increased the standard deduction for tax year 2018, rather than waiting until 2019.  It could have trimmed some brackets or rates.

So, what about the money that is not sent out in refunds or paid by the state to itself through debt collection?  The legislation gives the Governor until September 1 to examine and certify just how much of the surge in dollars is due to the tax policy issues, and how much is due to underlying economic activity. Underlying economic activity is good; it certainly accounts for some of the growth.  Northern Virginia’s real estate market is hot, Layne reported, producing higher recordation taxes.

But Layne reported that the surge in income is following the pattern predicted by its outside consultant, Chainbridge Solutions.  Taxes paid directly, non-withholding as opposed to withheld from pay checks, are surging well over last year’s receipts.  Tax refunds are down 10 percent, another sign that it is tax policy changes driving up the dollars.   He indicated corporate income taxes are not surging, but the General Assembly did make changes in those for tax year 2018 that dampened the new revenue.

Whatever does not go into the Taxpayer Relief Fund, per the Governor’s certification, will be available as a traditional surplus, Layne said.  He expect there to be some but made no estimate of the amount.

“The word surplus does not occur in my vocabulary,” responded committee co-chairman Thomas K. Norment, “those are unanticipated revenues.”   He asked Layne if the Governor had authority to spend it on his own (a question Norment can already answer) and was told no, except of course for the many uses of those funds already dictated in state law or the budget bill.

State tax reform growing out of the federal tax reform is a lost opportunity for tax year 2018, and probably for tax year 2019, but to the extent funds do accumulate in the Taxpayer Relief Fund this year (and maybe next), additional policy changes are possible.  What your legislator intends going forward would be a good question to ask in your thank you letter for that generous pre-election refund.