EPA: PM 2.5 At Current Levels is No Threat 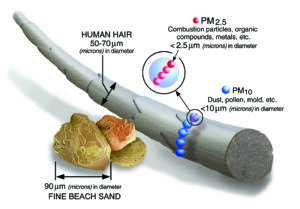 A micron is a tiny thing. A grain of beach sand is about 90 microns, and a human hair 50 to 70 microns in diameter. In the coming session of the General Assembly, you are about to hear that micron-sized particles are sickening and killing you. Do not believe it.

The focus will be on particulate matter (dust) of 2.5 microns or less, known as PM 2.5. On a recent web presentation by the Virginia League for Conservation Voters, a Northern Virginia cardiologist claimed it was proven “rock solid” to cause heart attacks, asthma, atrial fibrillation, high blood pressure and even diabetes.

This particular December 8 presentation was in support of planned legislation to require auto dealers and manufacturers to comply here in Virginia with the California mandates on low-emission and zero-emission vehicles. The same effort to blame health issues on PM 2.5 will be at the heart of the argument over the proposed Transportation and Climate Initiative carbon tax.

This debate was just concluded before the U.S. Environmental Protection Agency, which declined earlier this month to lower the national air quality standard for PM 2.5, a standard that Virginia already exceeds comfortably. Lest you blame this on Trump Administration leniency, the current standard was set in 2012 and parts of it are even older.

Unwilling to argue with a physician, I went and found my own expert, my colleague in the Thomas Jefferson Institute for Public Policy, David W. Schnare.  Schnare is a doctorate-holding career environmental regulator, and he promptly sent me a quick paper which I can share.

In other parts of the world, and the physician on the webinar was quite honest about this, far higher levels of PM 2.5 are common. The World Health Organization has a safety standard of 10 micrograms per cubic meter, slightly tighter than EPA but still a standard that Virginia localities meet easily.

Reducing particulate matter in the U.S. has been one of many goals and accomplishments of decades of clean air regulations. The claim that zero PM 2.5 is either possible or even of any value is hotly contested, with published results to dispute it. Schnare has 25 citations on his report.

Only a small portion of the PM 2.5 still in Virginia air even comes from automobile or truck engines, something else the VLCV physician admitted. Construction activities, industrial processes, agricultural activities, dust from dirt roads, fires and just life in general produce a background level of particles. If TCI passes, basically all existing PM 2.5 will remain.

The famed Renaissance physician I quoted at the start, Paracelsus, set the scientific bar when he demanded that claims about poisons be supported by evidence, a dose-response relationship. Over 20 years asthma prevalence in the U.S. has risen while PM 2.5 measurements have steadily declined. The conclusion is there is no dose-response relationship. PM 2.5 at current levels does not cause asthma.

Schnare highlights peer-reviewed work reviewed by EPA that found no relationship between either ozone or PM 2.5 at the current accepted levels and deaths from any cause. He also cites a recent study (something not getting much attention) that cigarette smokers with their particle-soaked lungs are doing better with COVID-19 than non-smokers.

Advocates for both of the two anti-gasoline approaches which will be pushed in January – either the zero emission vehicle mandates or the carbon tax and rationing approach of TCI – build on the shaky foundation of claimed PM 2.5 (and ozone) dangers. The levels are higher in some Virginia urban areas, if still below the national standards. Therefore, the worst impacts must be assumed among lower-income urban residents. This brings in claims of racial unfairness.

The health argument is a distraction. What advocates for both are really after, of course, is to push people out of fossil fuel vehicles and into electric vehicles or mass transit, also preferably with electric motors. They would be more honest  just talking about that goal, which is based on their firm belief that rising carbon dioxide is causing catastrophic climate change.

Advocates for the TCI carbon tax approach are also after the revenue, estimated to be up to $9 billion within the region over ten years. At least the LEV and ZEV approach produces no tax bonanza for politicians to spend.