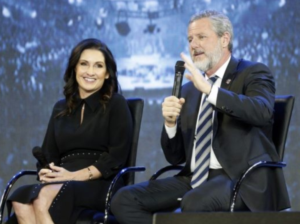 The resignation of Jerry Falwell Jr. amid a series of scandals may have a strong impact in Virginia where his late father built an extraordinary, ultra-conservative evangelical university in Lynchburg that later became highly politicized lightning rod supporting President Donald Trump.

Falwell has been caught up in a number of controversies including limiting speech on campus, going after The New York Times for trespassing when it reported he insisted that student ignore wearing anti-viral pandemic masks and so on.

What happened with Falwell Jr is as  an American story as apple pie topped with a Cross. It might have some straight out of the pages of Elmer Gantry.

After touting strict school policies that forbid students from drinking alcohol, watching “R”-rated movies or engaging in pre-marital sex, Falwell was pictured aboard a NASCAR mogul’s yacht half dressed with a semi-clad, pregnant woman who was said to be his wife Becki’s assistant. Falwell was holding a wine glass with a liquid in it but Falwell said it wasn’t wine.

Shortly afterwards, he gave an interview to the right-leaning Washington Examiner stating that his wife had been involved with a multi-year sexual affair with Giancarlo Granda, a former Miami Beach pool boy whom Falwell funded to set up a hostel business.

As scandals go, this one got even racier when Reuters reported that Falwell allegedly watched from a corner as his wife and Granda made love. (How long would a Liberty student last if he or she did that?)

I know that Liberty is a non-profit religious institution and may serve its students well but I have to note the hypocrisy on this blog about the supposed immoral, Marxist takeover of showplace state institutions such as the University of Virginia and Virginia Tech.

Their biggest sins appear to be to show concerns about making sure they are making every effort to include minorities in their class bodies and faculty and make sure that teaching goes beyond simple instruction in “Western” civilization. Some critics claim that could lead to promoting White Supremacy which it has at times in the past by excluding contributions made by other races and other cultures.

One irony of Falwell Jr. is that, as a lawyer and real estate man and not a religious scholar, he had saved Liberty from serious financial woes brought on by his father, who founded the school.

It didn’t always work out. One such financier orchestrated a $32 million bond issue for expansion plans and to build a stadium. He ended up in trouble with Texas regulators and the U.S. Securities & Exchange Commission. Ironically, the law firm associated with (hated) Bill and Hillary Clinton ended up holding the deed for Thomas Road Baptist Church, the Falwell family’s congregation as part of a settlement, Lehmann writes.

Falwell Jr. came up with some smart ways to improve. He vastly grew enrollment by making it easier for prospective students to access Pell Grants, Department of Veterans Affairs money and other federal student loans.

Falwell was a pioneer in on-line instruction and through sophisticated sales programs grew the number of on-line students to a stunning 95,000 – the second largest such body in the country. According to Lehmann and another author he cites, Liberty somehow manages to actually spend far less of its online revenues than other schools such as Notre Dame and the University of Phoenix, the nation’s No. 1 online school.

Lehmann points out, that when added up, lots of Liberty’s revenues come indirectly from taxpayers. The school makes big marketing plays to U.S. military personnel and their families.

Personally, I do not care what kinds of personal codes Liberty sets up for its students. That’s their business. I graduated from an all boys’ Catholic high school in the D.C. area. We had our own codes (although not as strict). The school avoided politics until recently, when alumni and conservative jurists Neil Gorsuch and Brett Kavanagh were nominated for the U.S. Supreme Court. There was quite a split among graduates.

My takeaway from the Falwell affair is be wary of hypocrisy. Father Falwell pulled this with his “Moral Majority” shenanigans. Son Jerry took that lesson on steroids.