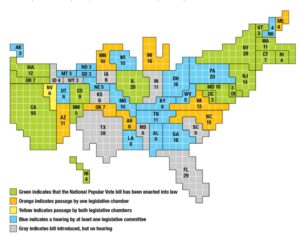 The status of the National Popular Vote Compact, which goes into effect once enough states have signed on to let the national totals determine their electoral votes.

As I’ve explained too many times to people who won’t believe it, President Joe Biden won Nov. 3. While there remains no evidence of widespread fraud or error, election law changes achieved by Democrats in key states were a major contributing factor to that outcome.

That transformation started here in Virginia in 2020, was boosted by the pandemic, and is continuing into the 2021 General Assembly. Here are some of the key proposals pending which Democrats believe – with reason – will bolster their electoral successes. I also point to a good idea to restore public confidence, which they quickly defeated. These are just some on an incredible list of election bills this year, and that list seems to miss some.

National Popular Vote Compact. This is the jewel in the crown. Passage of this in Virginia this year would not be sufficient to activate the compact, which requires that member states award their Electoral College votes to the National Popular Vote winner. But organizers are getting close around the U.S.

With this, there would have been no Donald Trump victory in 2016, but more important any Republican running in 2024 would start in a deep well. States like California and New York produce reliable Democratic margins hard to overcome in the more competitive states.

House Bill 1933 is sponsored by Del. Mark Levine , D-Alexandria, and Senate Bill 1101 is sponsored by Sen. Adam Ebbin, D-Alexandria. The Senate bill could have been taken up this week but was not. The House bill passed last year and this year’s version rests in the full House Privileges and Elections Committee. Perhaps the unintended consequences are being noticed.

If the legislature decides to kill the Electoral College, that reduces Virginia’s impact on the presidential choice, but the other changes pending will affect elections all the way down to the local level.

Absentee Ballot Drop Offs and “Curing.” Senate Bill 1245 is one of several that require local registrars to establish drop-off ballot boxes and examine absentee ballots early to look for fatal problems. If found, the registrar “shall” get in touch with the voter to allow them to fix it. The fix “may” include an entirely new ballot. During 2020 this happened in some Virginia localities, but not all. Allowing a new ballot is a new twist.

Absentee Ballot Processing. House Bill 1888 covers those other absentee provisions but also gets into how the ballots are collected in a central absentee precinct and processed. The patron, Henrico Democrat Del. Schuyler VanValkenburg, touted the bill in a Richmond Times-Dispatch guest column.

Voting Rights Review by Attorney General. This long and complicated proposal, Senate Bill 1395 and House Bill 1890, sets up a pre-clearance process for just about any state or local change dealing with elections and hands the decision to the Office of the Attorney General. If it passes it will require closer examination later, but this snippet from the summary is illustrative:

Certain unlawful actions, including knowingly communicating false information to voters, that are currently subject to criminal penalties will create civil causes of action under the bill.

Sixteen-Year-Old Registration. House Bill 2125 would not change the ages for actual voting, but it gets students of high school age on the voter rolls early.

Law Enforcement Powers Stripped from Election Officers. Most probably don’t know that an officer of election, in the absence of a police officer, has law enforcement authority. It is possible to think of situations where that would be good, but Sen. Lionel Spruill, D-Chesapeake, doesn’t like it and reverses it with Senate Bill 1111.

November City Elections. Spruill also has Senate Bill 1157, which moves city and town elections from low-turnout May to high-turnout November. This would start in 2022. Local elections are often official non-partisan, but unofficially just as partisan as any others. The vote on this bill (today) was 19-19 with a partisan mix. Lieutenant Governor Justin Fairfax broke the tie in favor.

GOP Bills. As noted in the opening, millions of American – rightly or wrongly – have lost confidence in the fairness of the election process. Del. Kirk Cox, R-Colonial Heights, a candidate for Governor, offered a fairly simple proposal:  Make the State Board of Elections evenly divided between the two parties, with three seats each. Currently the party of the Governor gets three seats and the out-party only two.

His House Bill 2088 died on a party-line vote in a House subcommittee yesterday. It is one of several Republican-sponsored bills, many going in the exact opposite direction than the majority party bills. A full Republican package of bills, many of them already defeated, include: Absentee signature matching, returning photo identification requirements, video recording of absentee ballot counts, and criminal penalties for interfering with official count room observers.

An effort to strengthen postmark enforcement on absentee ballots is among those already defeated.

Passed Last Year With Delayed Enactment. Two major election law changes made during the 2020 session are still on the books but not yet in effect. Effective this year, some local elections may feature ranked choice voting on a pilot basis. That will be an interesting experiment.

Next year Virginia starts allowing people to register to vote and then vote on election day, either at the registrar’s office or their actual polling place. Same-day registration is a huge policy change and may require additional personnel in polling places to accomplish.

A bill also passed in 2020 stating that polling places will be open an additional hour, from 6 a.m. to 8 p.m., starting this year. That needs a second vote of approval in this session, and an initial search failed to find a bill doing that. Maybe this is quietly going away. We election officers will applaud.