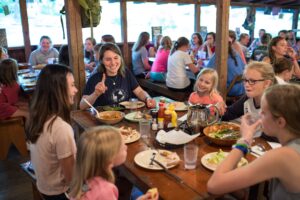 A philosophical question to ponder: If the Commonwealth of Virginia shuts down an entire industry by executive order to prevent the spread of the COVID-19 virus, what moral obligation does it have to help the businesses survive the epidemic?

Literally no industry in Virginia has been more impacted by the emergency shutdown than overnight summer camps. Summer camps do not comprise a particularly big industry — one guesstimate is that 75 establishments generate in the realm of $100 million a year — so they cannot be said be be economically “essential.” But they are essential, camp advocates say, for the mental health of thousands of Virginia kids, who need physical activity and social interaction.

Many industries have been slammed by the emergency shutdown. However, none but the summer camps have been entirely shuttered for all three phases. Camps generate 90% or more of total revenue from seven to 12 weeks during the summer, and if they are forced to close during that period, there is no way to make up for lost revenue.

Now a coalition of 15 overnight summer camps is asking Governor Ralph Northam and the General Assembly for a small piece of the hundreds of millions of dollars in federal CARES Act relief aid heading to Virginia. Specifically, the coalition would like grants equivalent to 75% of each camp’s average gross revenue from the past three years.

There is growing concern about the impact of social isolation on the cognitive development and emotional health of school-age children. Most discussion has been focused on the need to send children back to school where, in addition to the academic benefits, they can interact with peers and develop socially. The level of anxiety and depression of school-age children is on the rise under enforced isolation.

In theory, camps had access to federal PPP loans designed to help small businesses through the crunch. However, a glitch in the legislative language unintentionally kept most camps from getting any relief. Ninety percent of the camps that tried to amend their loans were blocked, said Henry DeHart with the American Camp Association.

No one knows what to expect next summer, although the operating assumption is that the COVID-19 epidemic will be around. If Virginia camps are allowed to re-open, they most likely will incur additional expenses for virus prevention and reduced attendance, DeHart said. Without relief, many could perish, he predicted.

Ann Warner, owner of Camp Mont Shenandoah, said members of the coalition have been in contact with Brian Ball, Virginia’s secretary of commerce and trade, and with several legislators. No one has yet filed a bill on the coalition’s behalf, however.

The camp coalition’s best bet likely is lining up support from rural legislators in whose districts camps are located. A national study of camps’ economic impact suggests that there is a 2.5 multiplier effect as camps purchase equipment and supplies, and as campers, staffs, and parents spend money locally on food and lodging. That would translate into an impact in rural Virginia of more than $250 million.

Bacon’s bottom line: Tough choice here. I normally oppose government subsidies for business. Everybody has a sob story, and everybody has their hand out. The nation can go broke bailing everyone out. But if the nation is spending hundreds of billions of dollars bailing out businesses and pumping liquidity into the economy, some consideration should be given to an industry that may be more adversely affected by emergency shutdown orders than any other.

This entry was posted in Business and Economy, Mental illness and tagged COVID-19, James A. Bacon. Bookmark the permalink.