Dems Do an About-Face on COVID 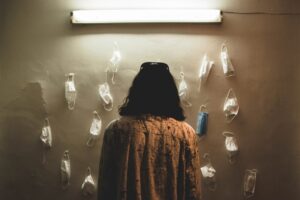 Some of us knew right away that it was not just a happy accident that the governors of four blue states suddenly announced two weeks ago that they were rolling back COVID restrictions and scrapping loathsome mask mandates.

It was clear that this Road to Damascus moment was triggered by polls. Really bad polls.

SFGate, the digital version of the San Francisco Chronicle, confirmed yesterday that they’d been shown some grisly internal polling conducted by the Democratic Congressional Campaign Committee.

It’s worse than many of us imagined.

According to writers for the publication, a poll that took the pulse of voters in 60 of America’s most competitive congressional districts showed Democrats in deep trouble.

Turns out, 57% of those polled agreed with this statement: “Democrats in Congress have taken things too far in the pandemic response.” Oh and it gets worse: 66% of “swing” voters agreed with that statement.

Now do you see why Democrats have been breathlessly rolling back restrictions and pretending that some sort of metrics are behind the move?

There’s even more bad news for the left: 64% agreed that “Democrats want to defund the police.” That could explain Nancy Pelosi’s declaration Sunday on ABC’s “This Week” that her party has now abandoned its defund-the-police mantra.

“Make no mistake, community safety is our responsibility,” Pelosi told host George Stephanopoulos. “I quote one my colleagues from New York, [Rep.] Ritchie Torres, brand new member of Congress, way on the left, saying that defund the police is dead.”

“That causes a concern with a few in our caucus,” she admitted.

No doubt. The Squad and others in the far-left wing of the party are at war with law enforcement and they won’t be quiet about it.

That’s going to be a problem for Democrats come November.

Read the report here. There is not a single morsel of good news for Democrats in it.

This may also explain the stampede for the exits by Democratic members of Congress. So far, 30 have announced their “retirements.” This is the largest number of members leaving from a single party since 1992. A sign that they know they are doomed to minority status after this November’s midterms.

Being in the minority is not nearly as much fun as running the show.

Others, like Rep. Eric Swalwell of California who reportedly canoodled for a bit with a Chinese spy, are trying to spin a narrative that Democrats are leading the country back to normalcy.

Pause & think about what we’ve done as Democrats. Covid is on the ropes. Overwhelming majority of Americans are vaxxed & our smallest kids will be shortly. Mask requirements in responsible states are being lifted. We’re coming out of this. And it’s exciting to shape what’s next.

It’s too late, Eric. Voters know that it was Democrats who seized on COVID-19 and used the pandemic as an excuse to stomp on civil liberties and mask 2-year-olds. We know they’d happily extend the emergency orders and the power it gave government for years if they could get away with it.

But the American people had their own Road To Damascus moment months ago and it led to a GOP sweep in Virginia and the landslide recall this week of three of the most radical members of the San Francisco School Board.

Buckle up. This show is just getting started.

This column has been republished with permission from Kerry: Unedited & Unemployed.

This entry was posted in Politics and tagged COVID-19, Kerry Dougherty. Bookmark the permalink.