I have published criticisms of the Northam administration’s handling of COVID-19 crisis not to embarrass the administration but to inform it and recommend how it might improve. But I find the administration’s action in removing from public view the main source of that embarrassment — “the page you are looking for no longer exists”[1] — to be profoundly unethical.

Health Commissioner M. Norman Oliver said in an interview yesterday, “Department and emergency services personnel throughout the state ran through a scenario in May 2019, looking at what would happen if a pandemic caused tens of thousands of deaths. They looked at everything from how to treat people to where to put the bodies.”

He did not say how rigorous the “run through of the scenario” was, if he or the Secretary or the Governor participated, whether the participants learned anything, or whether they took any action based on those lessons learned. But we know exactly what the scenario was, because the Virginia Department of Health got it from FEMA. (The national assumptions for such a scenario are below.)

Oliver also did not mention the Virginia Pandemic Response Annex #4 to the Virginia Emergency Operations Plan. That plan was remarkably prescient about the arrival and effects of pandemic influenza. It was built on the FEMA template which you can see here. The Virginia annex modeled it exactly. It discussed such things as state responsibility to stockpile supplies in case of such an epidemic.

In a related development, the Emergency Operations Plan has been removed from the Virginia.gov website[2] from which I have repeatedly referenced it in my writings.

Fortunately Rockbridge County, the City of Buena Vista and the City of Lexington apparently did not get the memo, because their Pandemic Influenza Annex, linked to that of the State, is still online[3] at this writing. It is a terrific plan, but depends upon the state holding up its end of the relationship.

So, I will share with you the nationwide planning assumptions so that you can judge their accuracy in predicting COVID-19.

The Community Strategy for Pandemic Influenza Mitigation can be found here.

HHS and CDC developed interim planning guidance with regard to the application and timing of non-pharmaceutical interventions for states and local governments in February 2007 (and it was updated in 2012). This guidance supports the development and implementation of a community’s overall mitigation strategy that includes both pharmaceutical and non-pharmaceutical measures, in the context of a Pandemic Severity Index. The Pandemic Severity Index (PSI) provides a framework that integrates the types of partially effective non-pharmaceutical interventions with suggested implementation and duration times in an attempt to maximize the overall benefit to the community, while minimizing the potential cascading consequences of implementing recommended interventions.

The PSI uses a case fatality ratio as the critical factor in categorizing the severity of a pandemic. This tool was designed to serve as a guide in discussions with schools, colleges and universities, and other community sectors and support the timely development and implementation of an effective local, regional, and state strategy in the context of an estimated level of severity.

The guidance recognizes that the connectedness of communities goes beyond spatial proximity to include ease, speed, and volume of travel between geopolitical jurisdictions. To balance the relationship of connectedness and optimal timing, the guidance proposes that the geopolitical trigger be defined as the cluster of cases occurring within a U.S. state or proximate epidemiological region which spans beyond a state’s boundary.”[5]

From the charts below, which FEMA and HHS included in the guidance for states and localities, you can see that Category 5 worst case projections without mitigation anticipated more than 1.8 million deaths nationally.

Current projections are in Category 2. If you look at the charts below, you will see that at federal urging state governments are implementing Category 4 and 5 recommendations to keep the pandemic outcomes at Category 2 levels. 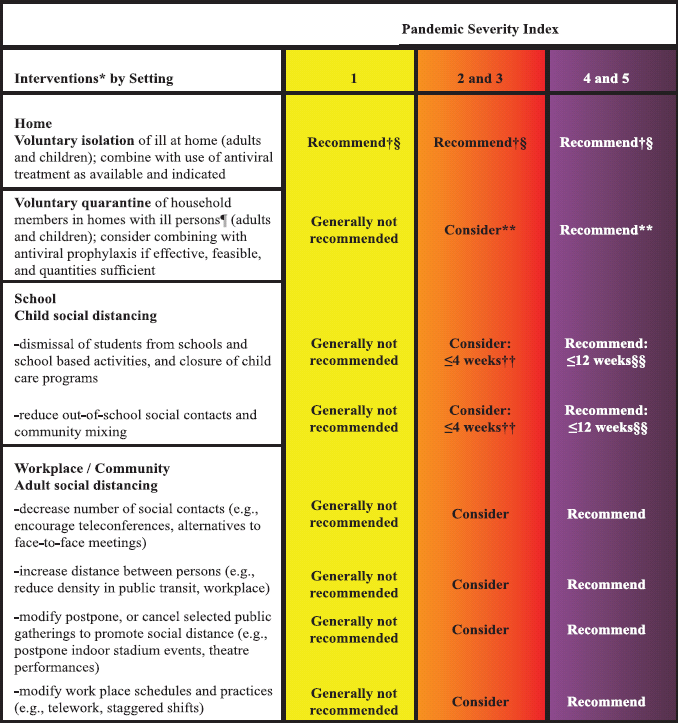 If you have watched the daily presidential press conferences that display the world-class talent at work on the problems 20 hours a day, it is impossible not to be impressed. But the federal government does not have state responsibilities including last-mile logistics. The President has recommended the governors use National Guard transport for distribution when commercial transportation is too slow or not available.

Governor Northam and his administration needs to get better help and may have access to it at MITRE, as recommended in this space. But taking down the pre-existing state planning document is a scandal. I do not know who ordered that action, but the Governor must find out and fire him or her publicly to send a message to both his administration and the people of Virginia about transparency and ethics.