Could Co-ops Save Money Buying Cheap Electricity from Wholesale Markets?

The Old Dominion Electric Cooperative (ODEC) provides electric power to eleven regional cooperatives in Virginia, Maryland, and Delaware. The Virginia co-ops supply electricity to about 10% of Virginia’s population. Now comes a study by the Institute for Energy Economics and Financial Analysis (IEEFA) claiming that customers of Rappahannock Electric Cooperative (REC) are paying 1.4 to 2.4 cents per kilowatt/hour more than they would had they purchased it from the PJM wholesale electricity market.

REC purchases 89% of its energy from ODEC, with which it has a contract through 2054. ODEC generates its own power through three gas-fired plants, a 50% ownership stake in the Clover coal-fired plant, and an 11% share of the North Anna nuclear plant. It supplemented that power with purchases on the wholesale market.

In 2017, ODEC reported that it purchased power (energy and capacity) at an average of $46.56 per MWh (4.6 cents per kilowatt/hour). That is consistent, states the report, with the following chart comparing ODEC power costs with the costs from outside suppliers: 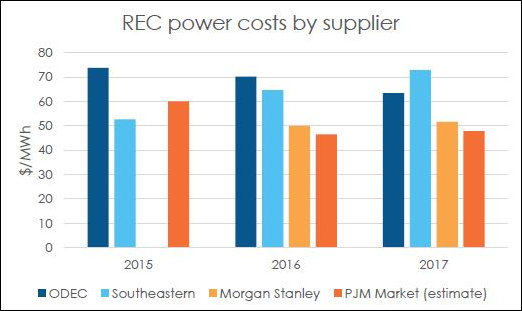 Concludes IEEFA: “It appears that REC customers could enjoy significant savings in power supply costs of REC were not locked into a long-term contract with ODEC.”

The study was commissioned by Repower REC, which describes itself as “a grassroots group of concerned REC members working in partnership with Solar  United Neighbors of Virginia, a nonprofit group that helps homeowners go solar, ‘to promote a more transparent and democratic Rappahannock Electric Cooperative (REC).”

Bacon’s bottom line: The comparison is useful. It shows how purchasing electric power from PJM’s wholesale market could be cheaper than building new generating capacity… at least in the short run. But, then, short-term benefits need to be weighed against long-term prospects. There is an abundance of electricity supply in the PJM territory right now. That may not always be the case, especially if power companies continue shutting down legacy coal and nuclear power plants. The advantage of signing a long-term contract is that it guarantees cost stability for decades at a time.

A prudent compromise might be to nail down a significant percentage of capacity — say, half — in long-term contracts and let the balance float with wholesale market conditions. And that appears to be exactly what ODEC has done. As the IEEFA report itself says, ODEC purchases between 55% and 63% of its total power supply from the outside.

This entry was posted in Energy, Regulation and tagged James A. Bacon. Bookmark the permalink.