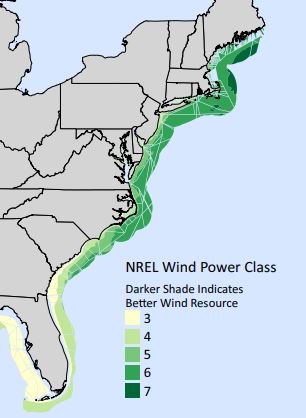 Despite major reservations, the State Corporation Commission has approved the two-turbine Commonwealth of Virginia Offshore Wind (CVOW) project at a cost of $300 million. The idea is to test a novel design of turbine blades and deep-water mooring before proceeding with a full-scale $1.8-billion wind farm off Virginia Beach. The logic, as I have understood it, is that it will be much easier to justify and finance the construction of dozens of turbines if we are secure in the knowledge that they will hold up in hurricane conditions, not disintegrate or topple over.

But now, based on his reading of SCC testimony, Steve Haner wrote recently on this blog, “The demonstration project will not be using the same turbine technology planned for that larger project and will not have time to demonstrate much of anything before a decision is made on the larger project.”

Let me repeat that. WHAT?

Rhode Island has completed a small wind farm off Block Island, and other states along the Atlantic Coast have committed to billions of dollars of wind farm projects. More than 8,000 megawatts of offshore wind development are supported by state policy in five Atlantic states, according to “Wind Power to Spare: The Enormous Energy Potential of Atlantic Offshore Wind,” a report of the Frontier Group. As of February 2018, 13 Atlantic offshore wind projects had leases and were “moving forward.”

None of the other states have expressed reservations about the ability of their turbines to withstand harsh weather conditions. None of them are building their own experimental turbines. They seem ready to charge right ahead. Indeed, Danish energy giant Ørsted is so confident that a U.S. offshore market is developing that it has created a new entity, Ørsted US Offshore Wind, and has spent $510 million to acquire Deepwater Wind, which built the Block Island project.

Said Thomas Brostrøm, CEO of Ørsted US Offshore Wind and president of Ørsted North America, as reported by the Virginia Mercury: “We are moving quickly to integrate the two U.S. organizations so we can deliver large-scale clean energy projects as soon as possible. We look forward to continuing Deepwater Wind’s first-class work along the Eastern Seaboard and taking the U.S. market to the next level.”

Conversely, are Virginia and other states proceeding recklessly with their wind farm designs without benefit of the knowledge to be gained from Virginia’s experimental turbines? Aren’t seabed conditions on the continental shelf different than the seabed conditions in the North Sea? Aren’t hurricanes more ferocious and more frequent than North Sea storms? Perhaps the experimental wind turbines are a good idea and should be built, but everyone is in such a rush to build offshore wind that they’re taking on huge risks that could put the projects and much of the electric grid in jeopardy.

None of this makes sense to me.