Grousing on a Grey and Wet Friday 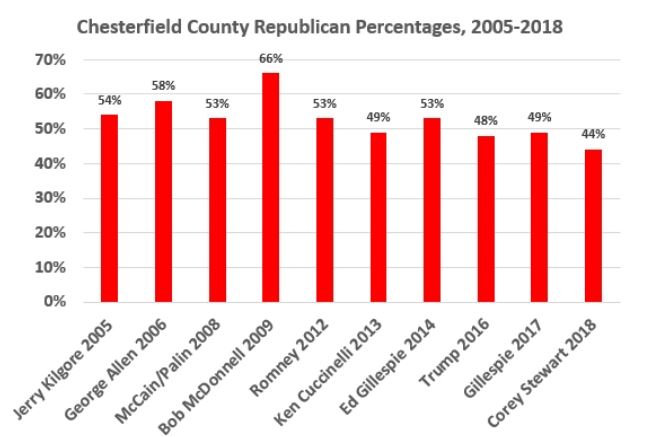 More than 30 years ago I told Jim Gilmore that his election as Henrico County Commonwealth’s Attorney was the most important Republican victory on the ballot that year, so it’s only fair to recognize that the real bell weather Tuesday was the election of a Democrat to the same job in Chesterfield County.

The folks at Blue Virginia have a simple set of charts displaying the harsh reality Republicans face in 21st Century Virginia, now the southernmost Northern state due to several demographic waves and several GOP tactical mistakes.  Perhaps it’s not quite time to find that old phone booth a previous generation of Virginia Republicans used as a meeting place, but a coming federal court revision to the legislative map may pull forward the final chapter to the Great Fall from Power to 2019 instead of 2021.

Here’s a new twist in the on-going saga of which stories on electronic media “news” outlets win the brass ring of inclusion in the daily VPAP summary.  The office of Speaker Kirk Cox issued a press release about some pro-business rankings for members of his caucus, which was dutifully printed (with no additional reporting content) on the party organ The Republican Standard.

That partisan news release shows up in today’s VPAP summary, which as loyal readers of Bacon’s Rebellion know is no longer happening with the writings of James Bacon or yours truly.  We were (are) producing many stories with actual reporting and great fairness, digging deeper than the ideological or party line, but aging curmudgeons that we are we also engage in biting commentary in other posts.

Apparently, the difference is that the GOP organ has an obvious bias, which is also the case with the Virginia Mercury coming from the left, but we at Bacon’s Rebellion can be unpredictable (well, I can).  Yes, the reporting at Virginia Mercury ranges from fine to excellent, but so does mine and Jim’s, and given encouragement I could do it more. Something else is going on here, I must suspect.

Ironically, my commentary pieces are just fine for VPAP if I get them published first in The Washington Post or the Richmond Times-Dispatch, but my news writing on Bacon’s site is tainted. I swear, you need a map to follow this logic.

And while we’re addressing that Chamber ranking

You will search in vain for any indication of which specific roll call votes were used to separate sheep and goats on this ranking produced by the Virginia Chamber of Commerce. Absent that minor element of transparency, it must be taken with a handful of salt. That may explain why no news outlet wrote about it (but Speaker Cox got it out to everybody, understandably).

I once was the Chamber’s chief lobbyist and such a partisan outcome would have made me very nervous, very concerned that it would burn bridges with an entire political party. The “grades” are going to be used heavily in campaign mailings and ads, perhaps providing counterweight to similar rankings with a different tilt. But any of them which do not reveal the underlying roll calls are suspect.

At the same time as that conversation with Gilmore mentioned above, there existed an annual poll on effectiveness in state government. Norfolk’s Virginian-Pilot sent out a survey to legislators, gubernatorial appointees and lobbyists asking who was and who wasn’t “effective” in Richmond. The results were predictable, given Democratic dominance of Richmond at the time, and proved an annoying problem in each campaign against an incumbent Democrat.

After a couple of years of our beating on the Pilot, they stopped doing it. It was truly bogus – of course a committee chairman with 20 year of experience is going to be ranked higher, and of course the partisan imbalance in the sample would skew the outcome. The difference with this is……impossible to judge without full disclosure.

And yes, in part I’m pushing this because I am sure that Senate Bill 966 which did so much damage to Virginia’s electricity consumers (including business consumers) was included as a pro-business vote at the behest of one of the Chamber’s largest members. Let’s see how the other bills match the Chamber membership list. I was on the committee for Virginia FREE years ago, and time after time a Virginia FREE donor demanded that its sponsored legislation make the scorecard as a pro-business vote.

This entry was posted in Media, Politics and tagged Stephen D. Haner. Bookmark the permalink.