Cages in the Senate of Virginia 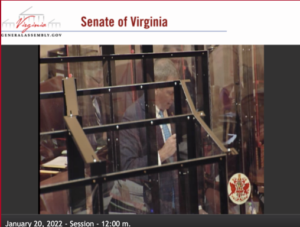 Once again, a picture is worth a thousand words.

Many of us are hoping that the General Assembly will consider serious legislation this term.

And consider it seriously.

We need to discount those hopes as we take into account the cages into which Senators have been put. They were erected at the insistence of the Democratic majority in that chamber and against the protests of their Republican colleagues.

All senators are assigned to their own individual (full length plexiglass) isolation booth surrounding their desks. The effect of all this plexiglass can be visually disorienting on a television screen, as the camera has to capture the senator who is speaking through several layers of reflective plexiglass. It isn’t any easier in the chamber. When a colleague addresses the chamber, it’s very difficult to see them unless their cage is in close proximity to yours.

We should pray that Dean Braband at Fairfax County Public Schools does not see this.

Though I understand he does not read my column.

This entry was posted in General Assembly and tagged James Sherlock. Bookmark the permalink.