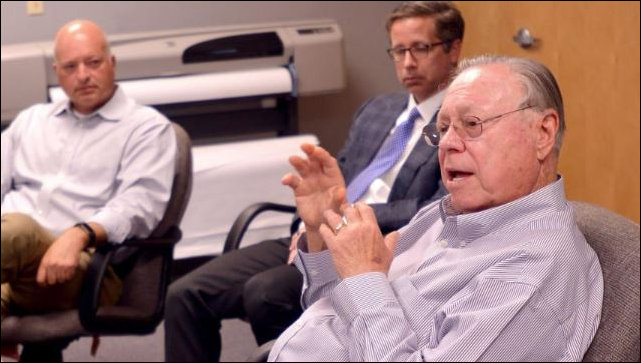 The City of Bristol, having mortgaged its future with a failed mall development project, is betting on another big-ticket project: a proposed $150 million casino with accompanying hotels, conference center, retail, and restaurants built at the failed mall location. The backers assert that the Bristol Resort and Casino would create an estimated 2,000 jobs initially, growing to 5,000 eventually, and paying an average salary of $46,000. The project would generate $30 million annual tax revenue for the hard-pressed locality.

All the backers need is for the General Assembly to rescind its ban on casino gambling in Virginia.

Normally, I would be highly skeptical of a project like this. When developers spin a fantasy vision of jobs and tax revenues, there’s always a hook — all they need is a little support from government. Loans, subsidies, loan guarantees, whatever. But in this case, the Bristol casino backers are funding the project themselves.

“Not one dollar is coming from the city of Bristol, the state of Virginia or the federal government. Clyde and myself are going to put all the money up for this,” James W. McGlothlin told the Bristol Herald Courier last September in announcing the project. By Clyde, he was referring to Clyde Stacy, a former high school classmate, fellow coal baron, and Southwest Virginia business leader.

If McGlothlin is behind the project, it has credibility. McGlothlin, founder of the United Companies, made his first fortune cobbling together non-union coal properties during the great coal boom of 1974. I got to know him in the early 1980s when I covered the coal industry for the Roanoke Times & World-News. During a succession of strikes by the United Mine Workers of America, United kept its mines open in the face of widespread picketing and violence. Actively engaged in Virginia politics at the time — an era when coal industry entrepreneurs had loads of money and carried clout in Richmond — McGlothlin was a major campaign donor. As the economics of the coal industry deteriorated, as I recall, United sold its coal industry interests. McGlothlin expanded his fortune by diversifying into natural gas and golf course development, among other interests.

As his business interests changed, McGlothlin became less involved in Virginia politics. But the College of William & Mary Law School graduate has given large gifts to his alma mater, and he and his wife donated a large art collection to the Virginia Museum of Fine Arts along with funds to build an expansion. Unlike many successful entrepreneurs who made their money in coal and retired to Florida, taking their money with them, McGlothlin has stayed committed to Southwest Virginia.

“Clyde and I were talking one day, and he told me about this concept. He said a casino, and I thought how hard this will be to do — but it immediately flashed in both our minds what it would do for the city and the area,” McGlothlin told the Herald-Courier.

He cited recent industry closings, low wages, limited job opportunities, the depressed economy of much of Southwest Virginia and an ever-growing need.

“It would solve our problems. It’s overwhelming how the match of the need coincides perfectly with something like the casino,” McGlothlin said.

Tax revenue from the casino, he said, “would be like manna from heaven.”

If there’s a catch, it’s that there is a narrow window of opportunity, and the General Assembly must act quickly. A market exists for only one casino in this part of Virginia, Kentucky, and Tennessee, so the first mover wins. “If somebody opens a casino in Kentucky or Tennessee, then I think our opportunity evaporates,” Stacy told the Herald Courier. And it so happens that a group called Raven Rock Entertainment has entered into an agreement with the city of Jenkins, Ky, to locate a 150,000-square-foot gaming area and 300-room hotel near the Virginia border. That project, like Bristol’s, requires an act from the Kentucky legislature.

It all sounds wonderful. And if the proposal had come from anyone other than McGlothlin, who knows a hell of a lot more about business than I do, I would be mercilessly skeptical.

First there is the question of market demand. The United States is crawling with casinos. There is endless competition. No one from outside the central Appalachian region is going to choose a Bristol casino, located in a former mall development, as a resort destination. Business will come from residents within easy traveling distance of Bristol. I’m dubious that there are enough gamblers with enough disposable income to keep a Bristol Resort and Casino going. But, then, McGlothlin has conducted the marketing studies, and I haven’t, and he’s got skin in the game, and I don’t.

Second, there is the question of tax revenues and job creation. McGlothlin and Stacy hired Richmond-based Chmura Economics & Analytics, which found that the casino-resort complex could generate an economic impact of $1.5 billion annually and 10,500 direct and indirect jobs, would contribute $70 million in state and local tax revenue, and would save the state an additional $48 million due to lower unemployment insurance and other aid programs.

I expect the jobs number includes not only casino jobs but jobs in hotels, the conference center, stores, and restaurants — plus jobs created as the payroll of newly employed workers and contractors circulates through the economy. Here’s what I don’t know: If most patrons of the casino/resort are local, to what degree will the new facility cannibalize expenditures on other forms of entertainment, other stores, other restaurants, and other meeting venues? If the project creates 10,500 direct and indirect jobs, how many direct and indirect jobs, not to mention taxes, would it siphon away from other businesses? The City of Bristol might benefit, but to what extent would other jurisdictions in Central Appalachia suffer?

As long as McGlothlin and Stacy are investing their own money, I don’t think it matters that their investment would redirect the geographic flow of local entertainment dollars. That’s the free market system. That’s creative destruction. But when we evaluate the pros and cons of Virginia gambling legislation, let’s make sure we’re looking at the net benefit to Bristol and Virginia.

This entry was posted in Economic development, General Assembly and tagged James A. Bacon. Bookmark the permalink.