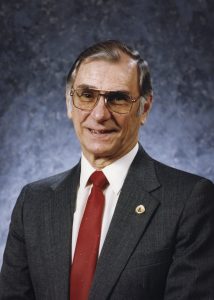 Bill LaVecchia died recently at the age of 95. He was an example of the best in professional public employees.

He was a veteran of both World War II and the Korean War. He earned a bachelor’s degree in civil engineering from Virginia Tech, and, subsequently,  a master’s in municipal engineering and public administration, as well. After working in municipal government in Tennessee and the town of Blacksburg, he was hired as Henrico County’s second planning administrator in 1959. He was to be an integral part of the management team that guided Henrico County over several decades from a largely rural county to one of the state’s large urban counties. His career culminated as county manager from 1984 until his retirement in 1992.

One of his most consequential actions occurred soon after he came to work for Henrico. He persuaded his boss, county manager Ed Beck, to attend hearings on the location of then-planned Interstate 64. They were the only administrators from the region attending and were ultimately successful in lobbying for a northern route for I-64 that brought it through Henrico.

Bill’s was not a household name, nor did it appear a lot in print. He probably preferred it that way. He was content to let others take on the public roles.

In addition to being a highly competent professional, more importantly, he was a genuinely nice person and had a humble air about him.

I was fortunate to have known and worked with him.

This entry was posted in Government workers and pensions, Uncategorized and tagged Dick Hall-Sizemore. Bookmark the permalink.