Back To the Patrick Henry Building 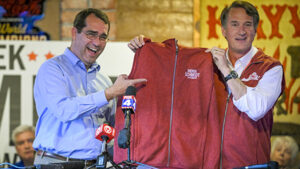 Governor Glenn Youngkin spent late summer and the fall campaigning around the country for Republican candidates for governor. He was passing out his signature red fleece vests all over the country.

His main goal was to help Republican candidates knock off Democratic incumbents, but he did appear with three incumbent Republican  governors. So, what was his record?

In one race in which the seat was open: super-red Nebraska. Youngkin appeared in a campaign event for Jim Pillen, the Republican candidate who won with 59.9% of the vote.

In two more competitive open seats, Youngkin’s Republicans lost: Arizona, where Kari Lake got 49.7%,  and Oregon, where Christine Drazan got 43.6% in a three-way race.

In the races that presented the greatest test, those with Democratic incumbents, the results were the following (showing name of state, name of candidate, result for Republican candidate, percentage of vote):

Some observers, including the University of Virginia’s Larry Sabato, asserted that the poor showing of the candidates for whom Younkin made appearances undercuts the national hype that followed his election in a state in which Democrats had dominated several election cycles. “Youngkin hoped his extensive out-of-state travels would create a big buzz and real momentum for a presidential bid. But the GOP flopped, Youngkin is at zero percent in the presidential polls, and his bandwagon has barely moved,”  Sabato commented.

On the other hand, Republicans emphasized the contributions that Youngkin had made in “very tough states, blue states, and in very tough races” in which he injected “excitement” and “kitchen table issues.”

Now, it is back to less exciting tasks such as putting the finishing touches on a budget that was being developed while he was off campaigning and then dealing with the General Assembly.

This entry was posted in Governance, Politics, Uncategorized and tagged Dick Hall-Sizemore. Bookmark the permalink.