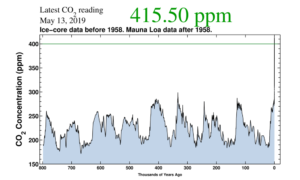 Four hundred and fifteen. US News & World Report is reporting that the amount of CO2 in the Earth’s atmosphere reached more than 415 parts per million. The article quotes research from the Scripps Institute of Oceanography from May 11.  Historical levels of CO2 in the atmosphere were measured through core ice samples prior to 1958 and directly from the Mauna Loa Observatory from 1958 onward. Take a close look at the graph accompanying this article. At first it’s hard to see the vertical line streaking skyward at the right edge. That’s CO2 emissions. From historical peaks oscillating between 250 ppm and 300 ppm over the last 800,000 years to over 415 ppm today. If that isn’t sufficiently startling, the annual peaks over the past few years: 2015 – 405, 2016 – 409, 2017 – 413, 2018 – 413, 2019 – 415 (so far).

Nobody wants anthropogenic global warming to be true but it is true.

Getting hotter than hell. NASA is now using satellites to measure the temperature of the Arctic. Scientists believe that these measurements are more accurate than ground stations. Unfortunately, the satellite-based measurements are coming in higher than the ground station measurements. NASA has data from 2003 through 2017 using the satellites. The three warmest years over that 14 year period? 2016, 2017 and 2015 – in that order. Certainly 14 years does not a trend-line make but it seems that all the latest data points to CO2 and temperatures increasing at an increasing rate.

Denier, skeptic, agnostic, believer. One often hears that criminal trials require proof beyond a reasonable doubt in order to assign guilt. Civil trials require proof based on the preponderance of the evidence. While there may still be the smallest possibility that anthropogenic global warming is not happening the proof seems to have moved from a “preponderance of the evidence” to “beyond a reasonable doubt.”  We all need to become believers.

Yes, Virginia … we are among the most screwed. The streets of Norfolk are already frequently swamped by heavy rains making it hard for some residents to get into and out of their neighborhoods. Homes that have often flooded are hard to sell, go down in value and generate lower property taxes. While subsidence plays a role the damage from subsidence is accelerated by anthropogenic global warming and the resulting rising seas. More rain means more runoff into the Chesapeake Bay threatening the $109b to $130b annual economic value of the Chesapeake Bay. Paradoxically, global warming will move water from terrestrial stores like rivers into atmospheric stores like humidity despite more frequent and more violent rainstorms. The Potomac River which supplies drinking water to Northern Virginia will have a lower summertime flow threatening that drinking water supply. When it’s not raining the increased temperatures will start more wildfires threatening the western parts of the state.

Now what? Once a person moves from denier to sceptic to agnostic to believer the obvious question becomes, “now what?” There is no actionable, specific answer to that question at this time. However, there is a framework that should be considered. It involves moral authority, measurement of externalities, taxation of externalities and redistribution.

Moral authority. It is absolutely true that neither Virginia not the United States can solve anthropogenic global warming alone. However, both Virginia and the U.S. must act to achieve the moral authority to convince other states and other countries to join us in addressing this issue. Additionally, once broad momentum for change spreads it will be the early movers who are exporting their technology and expertise to others. We must act now rather than waiting for complex, hard-to-manage alliances, treaties and other multi-lateral arrangements to be negotiated.

Measurement of externalities. Once you are a believer you must also believe that activities like generating electricity from coal causes more harm than generating electricity from natural gas or solar. You must believe that driving low miles per gallon cars causes more harm than driving high miles per gallon cars. You must believe that eating beef causes more damage than chicken which, in turn, causes more damage than eating tofu. The question is how much more damage. There will never be a completely accurate answer to that question. There doesn’t need to be. Directionally correct estimates of the differences in harm will suffice.

Taxation of externalities. The directionally correct estimates of differences in harm done to the atmosphere by various economic activities must be converted into “external cost charges” for those activities.   Some cases, such as solar energy generation, there may be “external benefit credits.”  The goal is not to raise more money for the government to waste (more on that later) but to assign the true costs of different economic activities and products to those economic activities and products. The “external cost charges and credits” should start small and rise over time. People should be given the chance to make adjustments.

Redistribution. There is no reason to give our government more money. The government in general, and Virginia’s government in particular, has proven that it will engage in wasteful or nefarious activities if given more money to spend. The monies collected from the “external cost charges” should be redistributed on a per-capita basis to the citizens. Less wealthy people are likely to incur lower charges since they drive less, use less electricity and eat less ribeye. Wealthier people will incur higher external charges. However, wealthier people have more to lose from anthropogenic global warming. As severe weather increases stock portfolios will decline in value, expensive homes will incur expensive damage, etc. In addition, wealthy people can better afford remedial actions such as putting solar panels on their roofs to avoid some of the external charges associated with increase electricity costs.

This entry was posted in Disasters and disaster preparedness, Energy, Environment and tagged Climate change, Don Rippert. Bookmark the permalink.