Another proposal to build a pipeline pumping wealth and prosperity into the Virginia economy has been brought down. That is my impression of what the impact would be of expanding natural gas supply to our state – added wealth and prosperity. This beneficial project is not to be.

Virginia Natural Gas has notified (read it here) the State Corporation Commission that it is abandoning plans for the Header Improvement Project, a major expansion connecting existing major transportation pipelines with its Hampton Roads service territory. That also ends its plans to provide service to two merchant electricity generating plants in Charles City County that would have been served by the additional supply.

The dispute over the expansion was discussed here earlier this year. The project drew the usual environmental objections, based on their firm belief that natural gas pipelines deliver death, but the SCC itself sank the plans over its skepticism that one of the electric generation plants would actually get built and need the supply. Writes VNG through counsel:

The Preliminary Order, among other things, directed the Company to file on or before December 31,2020, confirmation that “(i) C4GT’s financial close is scheduled, certain, and imminent; (ii) C4GT has approved expenditures by the Company on the C4GT components of the Project; and (iii) all relevant aspects of the agreements between C4GT and VNG remain in full force and effect.”1 The Company presents this letter to inform the Commission that the conditions precedent related to C4GT will not be satisfied on or before December 31,2020.

Which of the conditions related to C4GT would not be met is not specified.  It could be one or all three.

Without C4GT as a firm customer, more of the project’s capital costs might have landed on the other customers of the gas company. Virginia Natural Gas did not follow the path now common for Dominion Energy Virginia, which is to have the General Assembly and Governor dictate what energy project is “in the public interest.” The risk that customers might have to pay for unnecessary projects never seems to deter legislators. 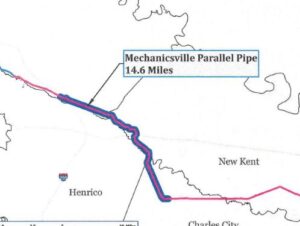 There are some enhancements that VNG will be moving forward on, improving its connections with the Transco main line. Existing customer such as Columbia Gas and a public service authority need some new supply. Presumably the 14- mile section of parallel pipe around Mechanicsville and Ladysmith compressor shown on this map are going away, but some version of the Transco tie-ins at the northern end in Fauquier and Prince William counties will proceed.

It will only proceed with SCC permission, however, and it will seek that through the existing case. It is possible the same environmental groups still will try to kill even this minor improvement. Their ultimate goal is to have natural gas, with all the energy and wealth it represents, nevermore be extracted from the Earth to warm your home, make your electricity, or energize your manufacturing plant.

With the earlier death of the Atlantic Coast Pipeline project and now this, Utopia must appear closer to them. All attention and contention now focuses on the Mountain Valley Pipeline, burdened by the additional costs and delayed construction schedule from the endless legal battles, but still struggling to proceed.

There is another planned natural gas merchant power plant, the 1,750 megawatt Chickahominy Power, still alive in Charles City County. It has received much of the permitting it needs. It will need another source of gas supply to proceed, although its process can also use at least some hydrogen. No announcements have been made about its plans.