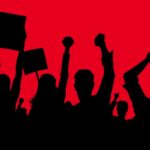 In mid-April, the City of Alexandria passed an ordinance allowing government unions to bargain with the city. Unfortunately, many of the ordinance’s provisions are lopsided: they grant special advantages for government unions to easily organize public employees and trap workers into paying dues.

Alexandria’s lopsided ordinance. Alexandria’s ordinance makes it is easy for a union to petition for an election, which the ordinance says may happen in several ways, “including, without limitation, electronic authorizations and voice authorizations.” Once there is a determination by a labor relations administrator or the city manager that a majority of employees have given authorization, no one can challenge the petition.

In a sense, if a union were to use ambiguous language to trick an employee over the phone, and that employee were to respond with “yes,” the union may show that the employee wants the union to represent them – even though that may not really be the case if the employee is not informed of both their rights and of all the facts. Once the LRA makes a determination, the employee would have no recourse to say that verbal “yes” was not what they meant, or to rescind their indication of approval.

Another way the ordinance unfairly favors the government unions: it could permit more than one union to be on the ballot during a runoff election to allow a union to organize employees without the ability of an employee to choose “no union.” In the scenario in which there is no majority between multiple unions on an initial unionization election (with the ability to vote “no union”) the LRA conducts a runoff election.

The catch is that only the top two options from the previous election get placed on the runoff ballot. Meaning, if “Union A” were to receive 34% of the vote and “Union B” were also to receive 34%, but the “No Union” option receives 32%, employees on the runoff ballot would not have the choice of voting against unionization. Even though 66% of employees in such a scenario did not vote for either “Union A” or “Union B,” they would be forced to choose between the two.

Double-standard for government unions. Adding insult to injury, Alexandria’s public employees are left stuck with a Hotel California situation. While it’s easy to organize a union, it is much harder to remove it if employees are unhappy or dissatisfied. Asking for a vote on whether a union will come in only requires 30% of employees to sign a petition, but to trigger an election to remove a union requires over half of the employees to sign a petition.

Additionally, employees can only file to remove the union during a 30-day window between the “one hundred eightieth (180th) and one hundred fiftieth (150th) day prior to expiration” of the union contract. If they miss that window and the contract is renewed workers, are stuck with the union for another three years or longer. If that sounds confusing, you’re not alone: that is probably the point.

Sales pitches and paychecks. Once a union has organized the employees, they are entitled to meet with new employees for up to 30 minutes to make their sales pitch, whether the employees want to meet with them or not – think of it as a timeshare presentation on steroids.

Unions are also entitled to take dues from an employee’s paycheck once the employee gives consent. Remarkably, a worker could unwittingly make this authorization over the phone. Once a public employee agrees to have that money taken out of their paycheck – even unintentionally – they could be locked in for up to a year.

Instead of these provisions, Alexandria should have looked to states that protect union democracy and public employee’s choice whether to pay dues or not.

A different model for government unions. In Wisconsin, Iowa, and Florida, public employees have the right to regularly vote on which union represents them in the workplace.

Many states allow public employees to stop paying a union at any time. Indiana recently passed such a law, and now requires unions to inform public school employees of their rights: to join a union and to pay or not pay dues.

The choice whether to sign a petition to ask for union representation or to sign a form to authorize money to be taken from a public employee’s paycheck are decisions that should be made in an informed way. Public employees have the right to know what they’re signing up for.

Alexandria’s ordinance does not include these safeguards. The electronic or voice authorization can easily be abused – leading to an unfair advantage for government unions, not public employees. While under state law, Alexandria could have said “no” to allowing public sector collective bargaining and keeping the decades old status quo, the city chose to be the first in the Commonwealth to allow it.

Unfortunately, this choice – and the decision to allow unions an easy path to organizing and taking dues from employees’ paychecks – city leaders put the special interest of government unions ahead of their own public employees.

This entry was posted in Government workers and pensions, Public employee unions and tagged Guest contributors. Bookmark the permalink.