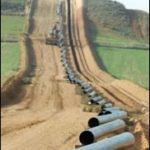 Delegate Lee Ware’s House Bill 1718 passed Tuesday with 57 positive votes, 42 from Democrats and 15 from Republicans, including Ware. The bill now moves to the Senate Commerce and Labor Committee, which has proven a challenging environment for bills Dominion does not want.

The presence of the entire Dominion lobbying team in the Capitol Tuesday was a sign of a full court press on the bill, as was the emergence of a new argument that it might cause natural gas shortages.

Delegate S. Chris Jones of Suffolk, chairman of the House Appropriations Committee, made the key floor speech against the bill.  In recent sessions Jones, one of four delegates with reportable levels of Dominion stock according to the most recent report, has abstained on many of the previous regulatory matters.  Not this time.  “My concern is the bill would not allow fuel diversity,” Jones said, raising concerns not mentioned in the earlier committee debates.

He spoke as if the bill would prevent construction of the pipeline at all or would prevent its use to serve industrial or residential customers in Hampton Roads, leading to supply bottlenecks in cold weather.  How that might be was never explained, given the bill involves only the price paid for transportation of gas to regulated power plants in Virginia.   That is at most a percentage of the pipeline’s capacity.

In fact, should the SCC prevent Dominion from using ACP natural gas in its power plants, that might create more supply for industrial or residential uses along the route.  But fears about constrained supply in Hampton Roads were being fed by Dominion, to the point that Ware needed to rebut them during his own floor comments.  Three of the five Democrats voting no represent parts of Hampton Roads.

An equally specious argument came from House Commerce and Labor Committee Chairman Terry Kilgore, who complained that the bill did not expand but instead limited the SCC’s scope of review.

It adds three specific issues the SCC must address before granting the utility the cost recovery it seeks:  At the time the decision to contract for gas from the pipeline was made, did the utility need the gas? Were other alternative sources considered and weighed? Did the utility decide on a reasonable basis that the contract was the lowest cost long term option for supplying natural gas?

They are especially important because both the pipeline and utility are owned by the same corporate parent, so this is hardly an arms-length transaction.  Nothing in the bill rules out other concerns.

Only once the pipeline is finished and used to transport gas to Dominion power plants will the SCC review the price that Dominion wants to pass along to its customers for their share of the construction costs and profits. The cost will be part of future fuel factor charges. Dominion lobbyists argued in committee the  SCC has enough existing authority and the bill is unnecessary.

Before the vote Ware noted, as he had in committee, that both current Attorney General Mark Herring and former AG Ken Cuccinelli back the bill. In committee Tea Party and environmental activists stood in the same line to speak in favor.