Why Virginia Democrats Are Pushing Ralph Northam to Resign 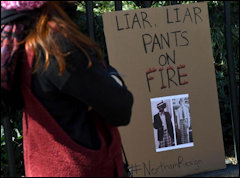 Virginia Democrats were on a roll politically until a story broke Friday that a photograph on Gov. Ralph Northam’s (D) 1984 medical school yearbook page showed a man in blackface and a man in Ku Klux Klan garb.

Democrats had seemed to be in a good position to win control of both the state Senate and the House of Delegates in this November’s General Assembly elections.

That all seemed to add up to a good chance of a Democratic sweep this fall. True, this year’s General Assembly has been a mixed bag for Democrats and centrist or progressive legislation. But the short session was seen as a sounding board for themes that would help them fine-tune their campaigns.

This is why Northam’s predicament is such a disaster for fellow Democrats regardless of whether he resigns. It will define the 2019 elections, pushing away such worthy topics as gun control or ratifying the Equal Rights Amendment, both of which were successfully blocked by Republicans in this General Assembly session.

Republicans had been licking their wounds after failing to win statewide offices for years. Compounding their weakness is that such prominent conservative leaders as Dick Black (R-Loudoun) and Bill Howell (R-Prince William) have retired or plan to.

Northam’s dithering claims that he was not in the yearbook photo but did, in fact, appear in blackface at a dance contest only make the Democrats’ position worse. It’s especially sad because Northam had broken through such GOP-led logjams as refusing to expand Medicaid coverage to lower-income Virginians.

Just about every significant Democratic leader in the state is urging Northam to resign. Some argue that they are enforcing a strict discipline against transgressions by leaders to gain moral high ground over President Trump. The real reason seems to be that Northam has to go so the Democrats can salvage at least part of the political roll they had been enjoying.

Peter Galuszka is a journalist living in Chesterfield County. This opinion piece was published originally in the Washington Post.

This entry was posted in Politics, Race and race relations, Scandals and tagged Peter Galuszka. Bookmark the permalink.