A Tale Of Two Bridge Projects

Some would say it’s not fair to compare the rapid repairs to a hurricane-damaged bridge in Florida to the desultory progress of the Laskin Road bridge project in Virginia Beach.

For those of us getting our cars realigned every few months and learning to zigzag as we attempt to navigate the moonscape that Laskin Road has been for three years – with no end in sight – it was impossible not to marvel at the miracle in Florida.

And pine for Pine Island.

When Hurricane Ian unexpectedly slammed Into Lee County on the Gulf Coast, the largely rural Pine Island communities saw their only bridge to the mainland buckle. It appeared that the several thousand permanent residents of the coral island would be marooned for some time.

But then this happened: 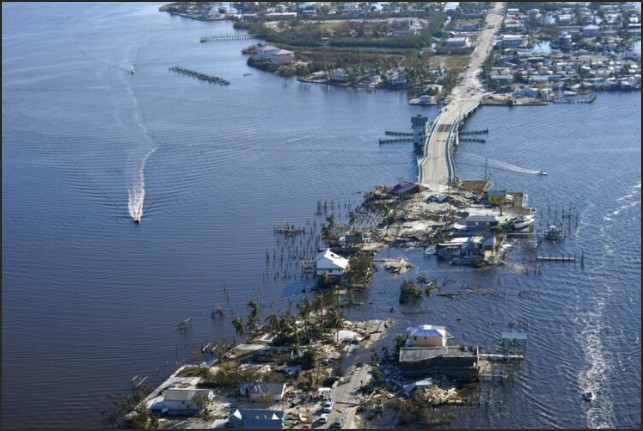 Construction on the Pine Island bridge has been completed today – just three days after construction began.

Happy to have the state step in and help get our Pine Island residents back on their feet. pic.twitter.com/a8GqPoHtP1

Gov. Ron DeSantis, who took charge of the project after experts planned to run ferry services to the residents, said the bridge repairs were temporary, but a necessary way for residents to get food and fuel and for linemen to access the island to restore power.

An October 5 press release from the governor’s office explained:

On Sunday, Governor DeSantis directed FDOT to work with Lee County to expedite work and complete repairs by Saturday, October 8. Work began on Monday and FDOT crews worked hard to finish the repairs in monumental timing – less than three days.

“Within 24 hours after I asked FDOT to get involved, we had more than 130 trucks rolling in and crews got to work,” said Gov. Ron DeSantis. “We made it a priority and we didn’t just get it done – we got it done quick. I want to thank the dedicated FDOT crews for working around the clock to restore the community’s access to Pine Island.”

“Hundreds of loads of sand and rock, various pieces of heavy equipment, and dedicated crew members have literally helped pave the way to recovery for this community.”

If only that can-do spirit infected VDOT.

In 2019, Virginia began to dismantle the feeder road system that runs along Laskin Road, bedeviling tourists and locals alike.

Confession: I like the free-wheeling feeder roads. They’re an anything-goes ribbon along a heavily traveled road. Our Little Autobahn where speed limits and rules of the road seem suspended. I use them constantly.

Once the project is complete Laskin Road will be an eight-lane freeway to the Beach, with a new bridge over Linkhorn Bay.

Initially, the project was set to finish next spring. Anyone with eyes knows that isn’t going to happen.

A spokeswoman with VDOT told me yesterday that the Laskin Road Bridge Replacement and Widening Project will now wrap up in the spring of 2024 — a year late — due to “various field conditions that were unknown during the time of initial scheduling.”

That will be five years after ground was broken on the project, whose cost has risen to $141.7 million. News reports in 2019 estimated the price tag at $83.2 million. 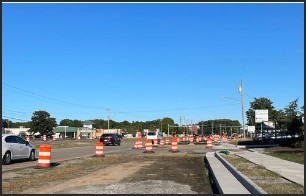 In the meantime, businesses along that heavily traveled corridor will continue to experience massive disruptions — in commerce and utilities — and drivers will continue to dodge potholes and serial road closures.

Here’s an idea: Virginia Beach city officials should change the image on the official seal from a lighthouse to an orange and white striped construction barrel. After all, there are two lighthouses in the city and thousands of barrels.

Most of them along Laskin Road.

This entry was posted in Efficiency in government, Transportation and tagged Kerry Dougherty. Bookmark the permalink.