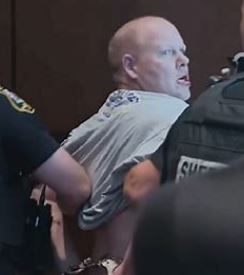 Loudoun Now has confirmed key details of the Daily Wire expose describing the ordeal of plumber Scott Smith and his family after his daughter was sexually assaulted in a high school bathroom by a boy dressed in a skirt.

Yesterday I refrained from going ballistic on this story, which was based on the reporting of a single, conservative news outlet. The account of a girl being assaulted by a transgender student given admittance to the girls’ restroom fit the conservative anti-transgender narrative so perfectly — the incident is exactly what conservatives have predicted — that I wanted to see reporting from another source before passing judgment. Other conservative publications have jumped into the fray, but we now have confirmation from the home-town paper.

One telling detail in the Loudoun County account warrants greater attention. According to Smith, who professes to be largely apolitical and not part of the conservative protest crowd packing school board meetings, the youth who raped his daughter identified as “gender fluid.”

In the LGBQT lexicon, gender fluid refers to a person who does not identify as having a fixed gender.

If you have a sexually predatory nature, gender-fluid is the way to go. One day, you’re hanging out in the lunchroom as a guy. The next day, you’re wearing a skirt, identifying as a girl, and you gain admittance to the girl’s bathroom. Then, whoopee, you shift back to identifying as a male when you want to sodomize someone!

The people who pretend that “gender fluid” is a real thing are absolute idiots — as in Nassim Nicholas Taleb’s formulation of Intellectuals Yet Idiots (IYI). Only someone totally bereft of common sense could rationalize a system where such lunacy can be taken seriously.

There are persistent rumors, which Loudoun school authorities have not denied, that the youth was transferred to a different school where he assaulted another female student. Talk about creating a “hostile environment” for females!

When you’re an IYI, you’re too blinded by ideology to conceive of the possibility that when you create a new set of rules that transgress safeguards based on centuries of common sense, people will exploit them. Cheats, predators and free-riders exist in every society. When you throw out all the old rules, you give them license.

This entry was posted in Crime , corrections and law enforcement, Culture wars, Education (higher ed) and tagged James A. Bacon. Bookmark the permalink.