This is the fourth in a series of articles discussing Virginia’s Standards of Learning assessments.

The Code of Virginia requires school divisions to provide students a minimum of 990 hours of instruction yearly. During the COVID-19 epidemic, the Virginia Department of Education waived that standard, allowing local school districts to offer remote learning and hybrid remote/in-person alternatives as they found expedient. Local practices varied widely.

Earlier this year VDOE surveyed public school divisions to determine the number of in-person instructional hours offered during the academic year. The table above displays the results collected, broken down by region, race (Blacks and Whites only), and by disability status.

Some broad conclusions emerge from this data.

Governor Ralph Northam ordered all public schools in Virginia to close March 13, 2020, due to the COVID-19 pandemic. Schools did not reopen for the rest of the year. Teachers and administrators were directed to “engage” with students that spring. Teachers spent countless hours preparing packets of work that were sent home with meals as well as attempting to maintain communications with students and families. Precious little of that work was completed and returned. To say that students had an extended summer break in 2020 is an understatement.

Incentives (or lack thereof). Given the extensive disruption, Superintendent of Public Instruction James Lane exercised emergency authority to waive school accreditation for the 2020-2021 and the 2021-2022 school years. Because students were prohibited from coming to school and SOL tests must be administered under standardized conditions, the tests were suspended entirely during the spring of 2020. Verified credits were essentially waived for the purpose of awarding diplomas for the graduating class of 2020. During the 2021 school year, high school students could earn a verified credit if they scored at least 350 on their SOL tests (400 is passing).

Similarly, since accreditation was waived, many elementary and middle schools administered far fewer expedited test retakes than in previous years. Statewide data is not yet available. But within the Comprehensive Instructional Program consortium, of which I am executive director, only 4.23% of attempts were retests compared to 11.6% in the last pre-COVID year. Within these 45 Virginia public school divisions, the degree to which 2021 retake rates changed from 2019 to 2021 accounted for approximately 37% of the difference in SOL pass rate differences from 2019 to 2021. Had school accreditation not been waived, more students would have retaken tests and pass rates certainly would have been higher, although it is unknown by how much.

In-Person Instruction and Poverty. An analysis of the in-person- instructional-hour data and 2021 SOL test data, as seen in the scatter plot below, suggests that that the amount of in-person instruction offered by school divisions in 2021 account for a bit more than 29% of the variance in SOL outcomes.

The divisions that outperformed this trend to the greatest degree tended to have relatively small enrollments of students who lived in poverty. The divisions that underperformed this trend to the greatest degree enroll a significantly higher percentage of students who live in poverty. According to the U.S. Census Bureau, the poverty rates of school aged children in Virginia range from Loudoun County at 2.75% to Colonial Beach at 37%. To provide a poverty context, the scatterplot labels the poverty percentile ranks of the top and bottom divisions outliers. 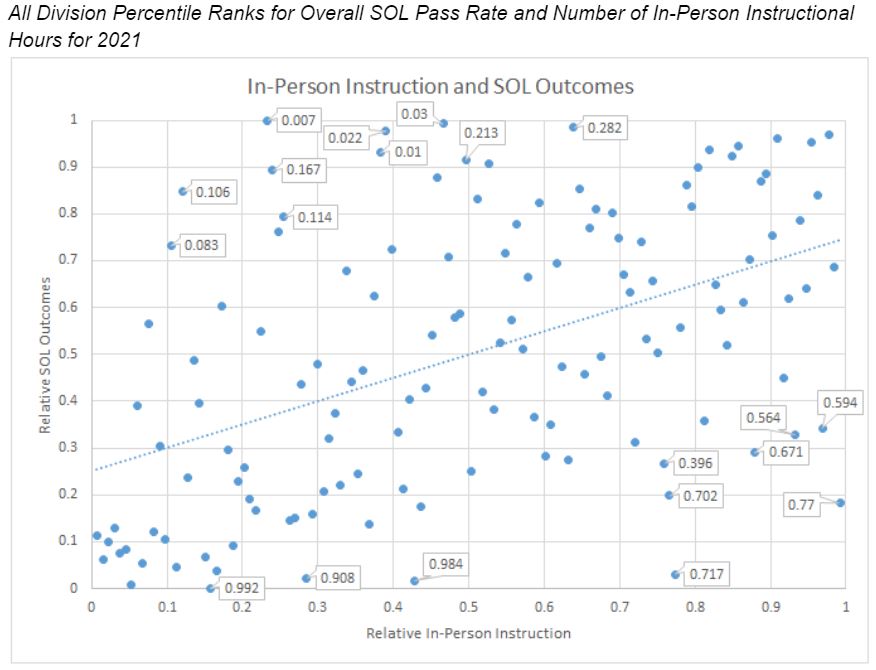 Please note that, as described in “Outperforming the Educational Outcome Trends-Virginia’s Region VII,” many divisions have successfully overcome the negative correlation between poverty enrollment and SOL outcomes (which had been declining until 2021), but the added variable of the in-person instructional hours compounded the challenge.

During the 2021 school year, one of the biggest problems teachers and administrators had was getting virtual students to fully participate in the educational process. It seems likely that more affluent parents have a greater capacity than less affluent parents to ensure that their children attend to their school work in a virtual setting. By contrast, when students are in class, teachers have proximal control and can make sure they are doing their work. Socioeconomic status matters far less during in-person instruction.

Other Factors. Table 3 displays the number of divisions that administered each SOL test during the 2021 school year. VDOE allowed divisions to administer Performance Based Assessments (PBA) in lieu of some SOL tests (elementary/middle history and writing, high school history) last year. For example, 56 divisions administered the PBA in Writing 8, which is historically among the SOL tests with the lowest pass rates each year. Divisions making that choice would have received a bump in their overall and writing SOL pass rates by not including the traditionally lower scoring tests in their data. Overall, 38% fewer SOL tests were administered in Virginia in 2021 than in 2019. 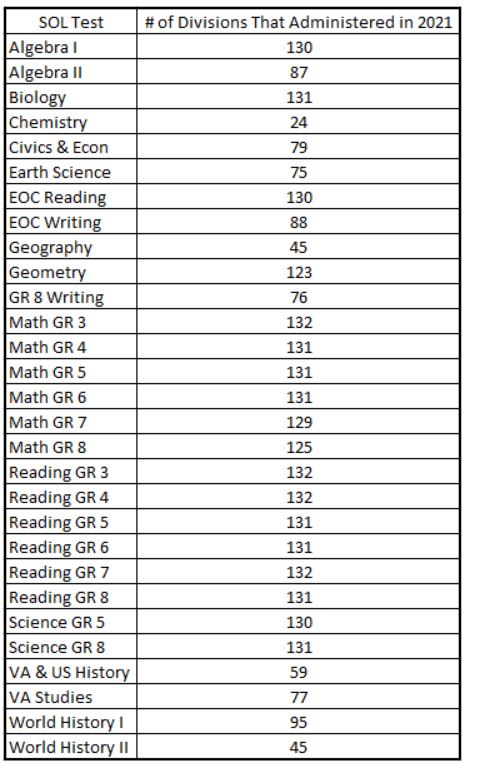 Conclusion. It is quite clear that the 2021 SOL data provides a less reliable evaluation of our instructional efforts than it did in pre-COVID. Decisions made by our elected officials and unelected bureaucrats impacted our SOL outcomes as much as the efforts of our teachers and administrators. What can be accurately said at this point is that we have far more students behind where they should be than at any point in recent history.

Given this predicament, it is imperative that the elected and appointed leadership in Virginia restrict any initiatives that do not guarantee a positive return on investment as measured by our student outcome metrics, primarily in the core reading and math skills. Many current initiatives claim to address this issue, but in effect may only do so in a tangential manner. These will serve only to dilute our efforts (more on that in the next article). If we want our students to overcome the loss of in-person instruction time during the 2020 and 2021 school years, we must rely on valid data to drive our efforts, set appropriate expectations for performance, and allow teachers and administrators the autonomy to meet those expectations based on their skills, resources, and the specific needs of their students.

Matt Hurt  is director of the Comprehensive Instructional Program based in Wise.