You Thought Payday Lenders Were Bad? Welcome to Internet Lending. 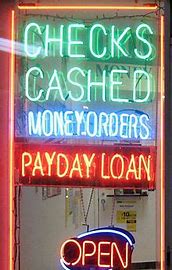 A new law that went into effect this year is designed to protect Virginians against “predatory” short-term loans by limiting what lenders can charge. And in honor of National Consumer Protection Week, Attorney General Mark R. Herring is encouraging Virginians to familiarize themselves with the risks associated with smaller-dollar loans.

I’m all in favor of educating consumers, and I’m glad to see that the AG’s office is vigilant against fraudulent lending. But I can’t escape the worry that the political class’s do-gooder instinct to “help” poor people by regulating one of the few industry sectors willing to lend them money may do them more harm than good. Regulating payday lenders pushes poor people into the arms of online lenders.

In a press release today, the AG’s Office reported some interesting numbers regarding the scope of payday lending. Citing data from the 2019 Annual Report of the Bureau of Financial Institutions, the press release notes that 83,107 Virginians took out 268,097 payday loans totaling nearly $110 million with an average annual percentage rate of 253%.

That sounds terrible. Poor people trapped in a cycle of indebtedness and poverty, and all that. If there is fraudulent misrepresentation involved in the short-term loans, the AG’s Office needs to crack down. Nobody wants liars and cheats in the marketplace. But the more germane question is whether regulating the terms and conditions of the loans really helps poor people.

In 2019 the average loan amount made by Payday lenders was $413 with annualized interest rates ranging from e4% to 818%. Herring’s press release urges consumers to consider alternatives to “predatory” loans such as borrowing from banks and credit unions. Good luck with that! Banks aren’t interested in small-denomination loans, which are expensive to originate and process. Besides, how many poor people seeking payday loans even have banking relationships? Wells Fargo requires a minimum opening deposit of only $25 to open a checking account — but then charges a $10-a-month service fee!

Payday loans are predatory but checking accounts are not?

Consumers can avoid the monthly fees if they maintain a minimum $500 daily balance. Great. If poor people have $500 in their bank accounts, they wouldn’t need that $413 payday loan, would they?

The AG’s office also suggests taking out a credit card cash advance. Yeah, right, as if poor people are too stupid to figure that out themselves. I’ll guarantee you that the overwhelming percentage of payday borrowers either don’t have credit cards or have maxed them out.

Here’s the problem with lending money to poor people: they often default, and lenders don’t get their money back. When lenders advance loans to categories of people who don’t pay them back, they have to charger higher interest rates to offset the risk. Otherwise, if they lose enough money, they go out of business. This is a fundamental precept of finance — a reality that only politicians could be oblivious to.

The Bureau of Financial Institutions provides some useful data. While payday lenders in Virginia advanced $111 million in loans 2019, they also charged off $6.5 million as uncollectible. So, right off the bat, payday lenders had to charge about 6% more on an annualized basis just to offset the risk of nonpayment.

Then there’s the issue of administrative overhead. A $400 loan costs as much to process as a $4,000 loan. Offices must be maintained, rent paid, employees paid, and lawyers paid? Lawyers? Yes, payday lenders in Virginia sought to recover nearly $2 million worth of loans to 2,752 borrowers through lawsuits.

If payday lending were a lucrative business, one would expect to see more lenders entering the marketplace to get a piece of the action. But that’s not what happened in Virginia. According to the Bureau of Financial Institutions, between 2016 and 2019:

The payday lending industry shrank. And it will continue to shrink. The new law caps interest and fees that can be charged under a short-term loan to an annual rate of 36% plus a maintenance fee, and sets the duration of loans to a minimum of four months. Fees and charges cannot exceed 50% of the original loan amount for loans less than $1,500.

Those caps will be severely constricting. According to the Bureau, the average payday term was 44 days. Interest rates ranged from 34% to 818%.

Where do poor people go when they are desperate for cash, they don’t have banking relationships, their credit cards are maxed out, and their friends and family don’t want to lend them the money because they don’t think they’ll get it back? They go online. There you see search results like these:

Fast Loans for Bad Credit — Got Bad Credit? No Problem.

Sound trustworthy to you? No, I didn’t think so.

An estimated 16% of Americans — almost one in six — have poor credit scores (below 580). For all practical purposes, these people have no access to conventional sources of credit like banks and credit cards. As the payday sector withers away, their only recourse is the wild, wild west of online lending.

Not surprisingly, Herring and his team have been focusing in recent years on online lenders, which, according to the press release, account for a growing share of the small-loan market. If you thought traditional payday lenders were bad, it turns out that online lenders are really sketchy. The AG’s Predatory Lending Unit has recovered more than $45.9 million in restitution and forgiven debt from online lenders. I doubt that’s what the authors of the payday loan legislation had in mind, but I expect Virginia will see a lot more of it.

This entry was posted in Finance (government), Poverty & income gap, Regulation and tagged James A. Bacon. Bookmark the permalink.