Wokewashing Comes for the Executive Mansion 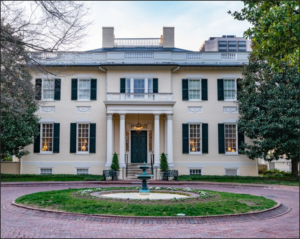 Ned Oliver over at Axios Richmond takes two separate and distinct wires and touches them together for maximum dramatic effect, namely how the tour for the Virginia Executive Mansion — recently reopened after the COVID pandemic — whose narrative has satisfied historians for a good two decades or more, is today somehow tied into Youngkin’s opposition to Critical Race Theory.

From the objective-because-it-is-short method at Axios Richmond:

Why it matters: One of Youngkin’s first acts as governor was to ban public schools from teaching what he called “inherently divisive concepts,” prompting fears his administration was attempting to whitewash history books.

Does anyone in their right mind think this is objective reporting?

A more nuanced analysis — one might say “goes deeper” — argument would mention that other institutions such as Montpelier and Monticello (both of whom moved significantly towards 1619 Project revisionism thanks to gifts from former and perhaps fellow Carlyle Group funder David Rubenstein) have reinterpreted both national landmarks in a way that obscures why either James Madison or Thomas Jefferson deserve any special notation in our framework.

Let’s not get that in the way of a free smack on the governor, right?

As for weaponizing the tour as if it were some sort of insight into Youngkin’s true thoughts on the matter, Oliver mentions that the tour is indeed the same tour that has always been on offer, even during the Northam and McAuliffe eras.

This notable — one might dare say “reason not to write it this way” piece of information — doesn’t seem to press pause on anything.

Meanwhile, the political pressure to reinterpret the Executive Mansion tour not just merely to include but emphasize slavery betrays the endgame.  If it were purely historical, then it would have been handled through those channels.

Yet the very moment it becomes political? That’s how you know it is political.  Which means the entire piece and perspective is indeed one more effort in a long tapestry of political reinterpretation of historical (and arguably factual) landmarks in Virginia.

Now if Youngkin is standing tall against that? Then three cheers for the governor.

But if the governor is merely reopening the Executive Mansion for tours and the 1619 Project folks are demanding a political and, dare one say, Soviet-style reinterpretation of history through a particular lens? It strikes one to say that this is the story that “smart brevity” ditches in favor of an abrupt if telling effort.

This entry was posted in Culture wars and tagged Shaun Kenney. Bookmark the permalink.