Who Was Williams Carter Wickham? 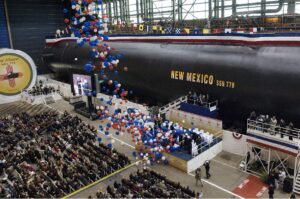 The christening of the U.S.S. New Mexico at Newport News Shipbuilding. Why is this illustrating a post about Williams C. Wickham? (And BTW, I’m in the photo sitting next to Ralph Northam on the front row.  My Dad, too. Look closely for his brown rain coat.)

Willams C. Wickham had his memorial in Richmond’s Monroe Park torn down a few nights ago. It was an Edward Valentine statue (will we burn the Valentine next?).  Like many, I had walked by it in ignorance. As he passes from sight, a few facts about his life if you are interested. 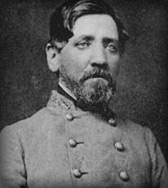 Without Wickham, there might not be that mighty naval shipyard on the James River in Newport News, where I worked 12 years with 20,000 others. That shipyard has probably been the most powerful engine for growing the black middle class on the Peninsula, with generations of families earning good livings and financing college educations. Maybe Wickham would have been proud of that, maybe not.

It came about because Wickham, according to this, enticed Collis P. Huntington to start investing in Virginia railroads – which led to the founding of the shipyard by Huntington at the Newport News coal terminus. Wickham served as vice president and then president of the Chesapeake and Ohio Railway. Huntington, of course, was one of the Big Four who built the Central Pacific Railroad and linked the continent at Promontory, Utah.

Wickham had been a delegate to Virginia’s convention on secession and voted to stay in the union. He was on the losing side of the vote, but like many stayed with Virginia and rose to be a general of cavalry in most of the Virginia campaigns. By the end of the war he was in the Confederate Congress and was part of the Hampton Roads conference seeking a negotiated peace with Lincoln before Grant crushed Lee’s lines at Petersburg.

Post war he was politically a Republican and a presidential elector for Ulysses S. Grant. (Did they meet at that peace discussion?) Presumably, that would indicate support for the 15th Amendment on voting rights and the election of large numbers of black state legislators and congressmen during the Reconstruction period.

Wickham died at 68 in 1888, just as the first iteration of the shipyard was being founded by Huntington, mainly to repair the colliers visiting the C&O coal piers.  But as a major business and political leader rebuilding the South’s economy for two decades, and a founder of the C&O, his story involves more than the war. He also served in the State Senate (never crossing Huntington, I’m sure). Having posed him postmortem in the uniform for the statue instead of a suit, of course, Valentine sealed his eventual fate.

In 2017 after the Charlottesville debacle, descendants of Wickham called for the statue’s removal, saying his success was built on slavery. That charge certainly was true of the pre-war period, with his ancestors including some of the most notorious leaders of Plantation Virginia. Perhaps his post-war politics and management of the C&O were also tainted, but slavery was gone. When they fenced up Monroe Park for renovations, I expected the statue to disappear quietly. It would have been simpler.

Now about this Christopher Columbus fellow… still doubt we’re just getting started with this?

This entry was posted in Culture wars, Uncategorized and tagged Stephen D. Haner. Bookmark the permalink.